The video hosting website YouTube has been running the automated Content ID system for the last five years or so. It uses so called reference files - samples if you will - to identify content that is infringing on the rights of companies that have uploaded those files to YouTube. The problem with the system up until now was that it misfired regularly. Remember the story of the guy who made a nature video and got nailed for it by the system? The birds in the background apparently matched to something one of the publishers uploaded to YouTube's Content ID system.

Your video "name", may have content that is owned or licensed by "company claiming copyright", but it’s still available on YouTube! In some cases, ads may appear next to it.

This claim is not penalizing your account status. Visit your Copyright Notice page for more details on the policy applied to your video.

Yesterday Google announced a change in the process that is giving users more rights and options in the appeals process. When a claim is rejected by an owner now, the user who filed the claim can file an appeal, leaving the claiming content owner with two options: release the claim or file a formal DMCA notification. 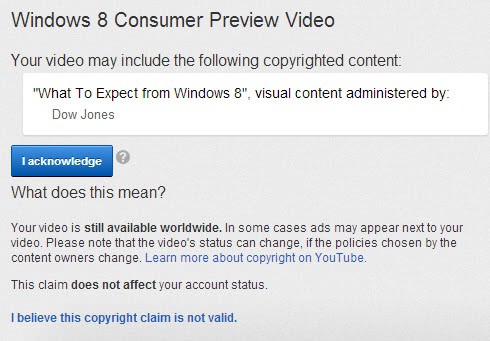 Google in addition has improved the algorithm by adding a queue for videos that are mistakenly identified as copyrighted by someone else. These videos get manually reviewed by a team before they are dismissed or processed normally.

A process that is giving all YouTube users more rights and options to act when receiving copyright complaints has been long overdue. Regular users finally have an option to force content ID companies to check the claims thoroughly by forcing them to file a DMCA notification or release the claim. I can see lots of users who received invalid claim file an appeal in the coming days to get companies to release the claims.

Previous Post: « GAuth Authenticator: use Google 2-Step Authentication without mobile phone
Next Post: How to save old Office formats in Google Docs »