I love to browse around new projects that have been added to the Kickstarter crowd funding platform. While I'm mostly interested in board and computer games, I have also discovered electronic devices on Kickstarter like the Android-based video game system OUYA which recently broke the Kickstarter 24 hour funding record, or the LED status light Blink(1).

The Ubi, the Ubiquitous Computer, is a voice-controlled wireless computer that has already reached its funding goal of 32,000 Dollars. The device is powered by an 800 MHz Arm Cortext A8 processor, 1 Gigabyte of RAM and Android 4.1 Jelly Bean. you get on top of that lots of connectivity, including WiFi, USB 2.0, Bluetooth 4.0 and temperature, humidity, air pressure and light sensors.

You plug the computer into a 100-240 VAC 50-60 Hz wall outlet to use it. First time users need to select the wireless network and enter the password to establish the connection. This can be done via voice, a smartphone app for the iPhone or Android, or by downloading a small file on a desktop PC. 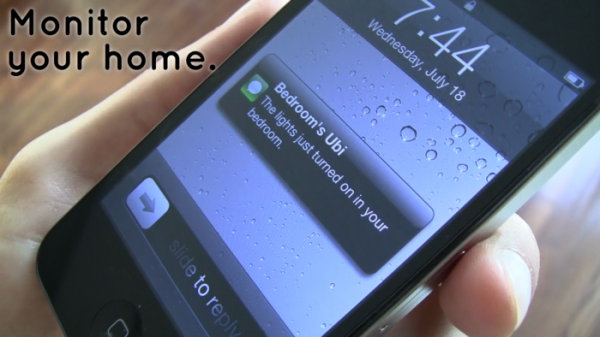 As far as functionality goes, the project page lists the following interesting options:

The device is open, which means that third party developers can create their own applications and uses for the Ubi that may go beyond the initial functionality.

Take a look at the following promo video to get an idea of what the device is capable of.

The hands-free approach can be interesting for a number of scenarios, from retrieving information while cooking over research to medical care. It needs to be noted though that the Ubi appears to be limited in several ways. The Ubi's Internet search is for instance best suited for short one-sentence answers. Something like "how many grams are a kilogram" works well, while "a summary of Shakespeare's Rome and Juliet" will probably not.

What's interesting the most are the sensors that the Ubi ships with. If you plug a device into every room of your home, you get great control of a room's average noise and light level, temperature and humidity. These sensors can trigger notifications on your smartphone, so that you know exactly when someone turns on the light in your home, or when temperatures reach critical levels.

Users who pledge support can get an Ubi for $189, or two for $349. This is quite pricey considering that you can get a Nexus 7 tablet for $199. While you do not get the sensors among other things, it may definitely be something that could hold the Ubi back in the long run. It's no hands on approach on the other hand could help it carve out a niche for itself. The estimated delivery data for the Ubi is February 2013.