The Spirit Engine 2 is a side-scrolling role playing game for the PC that has been around since 2008.  Back then it received lots of praise from the community, and I have to say rightfully though. The game shares all the traits of a successful roleplaying game, from party selection to a compelling story, a combat system that plays a lot like earlier Final Fantasy titles, and character progression throughout the game.

When you first start you are asked to pick a difficulty level and three of the nine available characters. Three character classes, Knights, Musketeers and Priests, are available, and it may make sense to have one of each class in your party. One that is out of the way you are introduced into the game's mechanics. 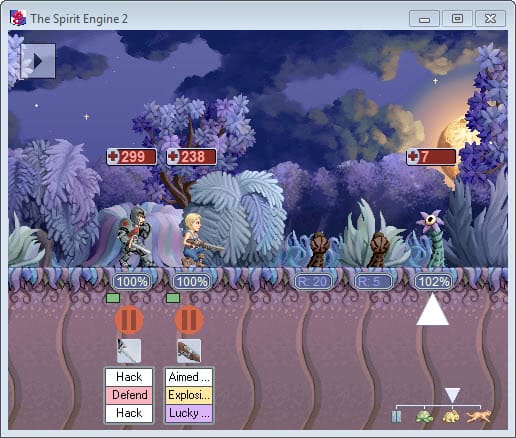 Your characters meet up in the tutorial as well which is a nice change from many other games where the group has already met and you do not know really anything about how that came to happen. If you are not into the story though you can skip past at any time to concentrate on combat and character progression.

Combat plays in realtime more or less, with skill chains playing an important role in the game. When you look at the screenshot above you notice that the two characters have three different skills listed underneath. The green bar indicates the ready level, and once it reaches a certain threshold, an action is executed. What makes this game interesting is that you can pause that for a while to accumulate additional momentum to execute up to three skills at the time.

This becomes an important part of your arsenal quickly in the game as it allows you to finish off enemies that would otherwise move to the back, or avoid temporary barriers and stuff like that.

The character first in line is usually attacked by the enemies unless they have special powers allowing them to target multiple characters for instance. You can move characters around in order with the spacebar which may save a character from dropping to the floor. Unconscious characters come back after a while unless the whole party is lying on the floor, at which time the battle is lost. 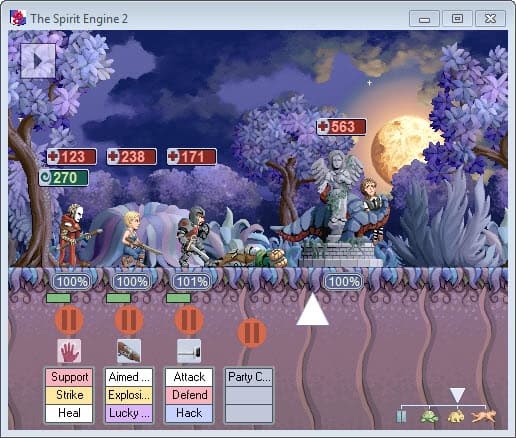 The combat balance is pretty good on normal, not too easy and not too hard to frustrate you. Graphics and sound are really good as well and add to the atmosphere of the game.

The game will entertain you for a good ten hours or so which on normal difficulty. When you play on harder difficulties you may need to replay certain areas to grow stronger before you head out to harder areas. As far as replay value goes, it needs to be said that the plot itself does not change even if you select a different party or difficulty level. Still, you may be interested in trying a new party on harder difficulty levels once you beat the game on easy or normal.

If you are into role playing games then this game could be exactly what you are looking for.  It ticks all the right boxes and should keep you entertained throughout the whole game.