Today I'm bringing you a review of Tequila Zombies 2, a straightforward well designed side scrolling action game that puts you in the role of Miguel or Jaqueline to fight the zombie infestation. The graphics and animations are solid for a Flash game, and gameplay should keep you entertained for a while.

Each level of the game consists of ten stages that you have to complete to move on to the next. Zombies pour into each stage from the left or right border and it is your tasks to eliminate them all. You begin each round with a melee weapon but get all sorts of weapons, armor and drops from zombies which help you beat the later stages of the game.

The drops are linked to the game's update system which means that you will only get drops that you have unlocked between levels. That's not a lot at the beginning, as you only get the chance of a pistol drop. Once you progress and earn some money, you can buy chainsaws, automatic weapons, armor, explosives and even the almighty minigun. 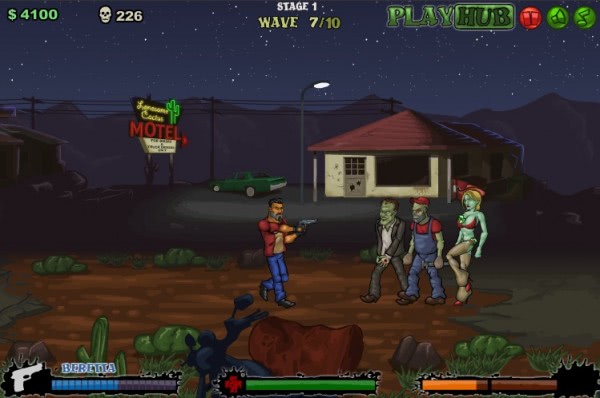 You have to remember though that those are drops and not equipped right from the beginning. There is usually no shortage when it comes to drops though, and if things get desperate you still have your special attack that you can activate with a tap on the space bar. These usually clear the screen from all regular zombies giving you some breathing space.

Regular zombies? It would become boring pretty soon if you would have to fight only regular zombies. While they come inÂ  a wide variety, from the zombie dogs to flying gun-wielding zombie angels and your regular two-legged assortment of zombies. They alone add variety to the game, but it is the bosses the game throws at you that really require all your attention and skill.

You will meet three bosses in every level that are harder to kill and usually accompanied by an unlimited wave of regular zombies. Your tasks is to kill the boss to stop the endless hordes from attacking you. Special drops that birds carry around on the map help you tremendously here. They usually carry weapons that you do not have bought as an upgrade yet and are often essential to getting a boss down as soon as possible. 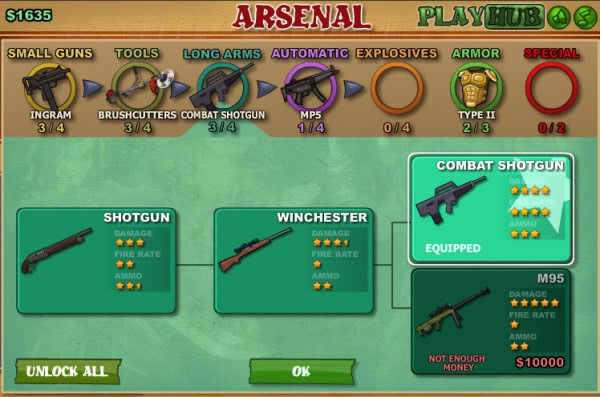 As far as controls go: you move with the AD or left and right cursor keys, use W or up to jump, space to activate the special attack, and the mouse to aim and shoot or slash. When you die or complete a level, you can enter the arsenal to buy upgrades to power up your game in later stages and levels.

Tequila Zombies 2 is a fun game that should keep you entertained for a while. It offers enough variety game play wise to not get boring after the tenth or so wave of zombies which is a rare trait for these kind of games.