Several big players have entered the consumer cloud storage market in the last twelve months or so. We have seen Google introduce the company's own Google Drive service, Amazon its Cloud Drive, and Microsoft's launch of the SkyDrive desktop client.

Established cloud storage providers such as Dropbox were now facing competition from companies that play in another league revenue-wise. Back then we believed that companies like Dropbox had to improve their service one way or the other to stay competitive.

Back in April, Dropbox increased the extra storage that users of the service could get from 8 Gigabytes to 16 Gigabytes, effectively doubling the maximum amount of free extra storage space. Dropbox users can increase the available storage by referring other users to the service, by taking part in promotions or beta features like uploading photos from mobile clients.

Today, Dropbox has announced the launch of new Dropbox Pro plans that effectively double the available storage for all subscribed Pro users. Good news is, the prices remain at the old level.Plus, there is a new Pro 500 plan that provides subscribers with 500 Gigabytes of storage.

Here are the new plans: 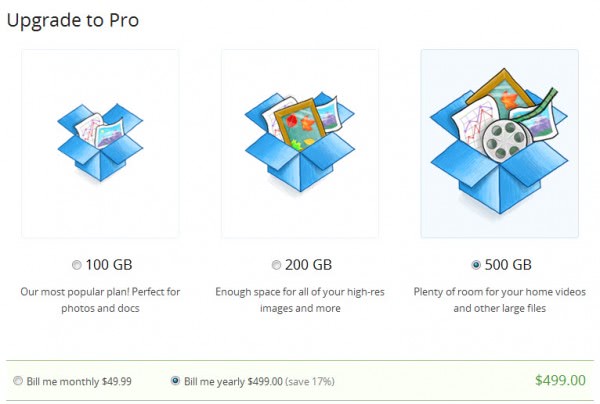 The storage of existing Dropbox Pro users is automatically doubled to reflect the change. The new pricing page is said to go live later this evening. As of right now, it is still displaying the old storage information and missing the new Dropbox 500 plan. We update the article as soon as the page goes life to add the missing information.

Update: Dropbox Pro 500 provides you with 500 Gigabytes of cloud storage for $49.99 per month, or $499 per year. There is also a new optional feature called Packrat, that enables a unlimited undo history.