Give your PC a much needed Audit with Belarc Advisor - gHacks Tech News
ghacks.net

Give your PC a much needed Audit with Belarc Advisor

Auditing PCs falls more in the realm of businesses and organizations, and not home computer owners. With that being said, home PC owners can benefit from an audit almost as much as businesses can. Belarc Advisor is a free audit software for Windows PCs that you can use to gather information about your PC. While you may like the fact that it displays a PC's installed hardware, some of the information the audit provides can be used to improve the security of your computer system.

You run Belarc Advisor after you have downloaded and installed it on your system. The program creates an audit automatically, and displays its finding in a local HTML page that is automatically opened in the system's default browser.  The report displays an overview of the system at the top, followed by various information about installed applications, users, the network or installed Windows updates. 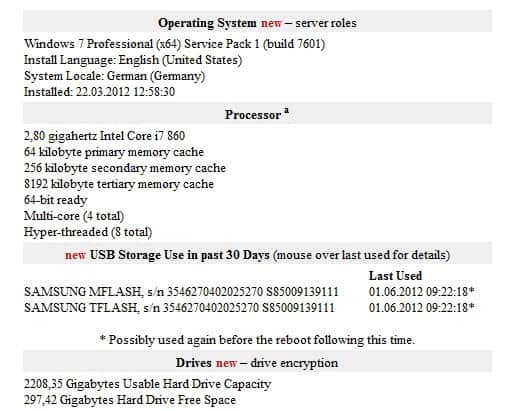 Lets take a look at useful information that you can get out of it:

You find advertisement for Belarc's commercial products in the PC audit report. It is easy enough to ignore those textual ads though.

Belarc Advisor all-in-all is a handy program to quickly run an audit of a PC running a version of Windows. The software is compatible with all 32-bit and 64-bit editions of Windows, from Windows 95 all the way up to the very latest versions.

Martin Brinkmann is a journalist from Germany who founded Ghacks Technology News Back in 2005. He is passionate about all things tech and knows the Internet and computers like the back of his hand. You can follow Martin on Facebook or Twitter
View all posts by Martin Brinkmann →
Previous Post: « Back Up PC Files With BitReplica
Next Post: AutoUP, Scan for Software and Windows updates »