Check if Your Devices Are Compatible With Windows 8

Before you consider installing a version of Windows 8, you should make sure that all of your third party devices work fine with the operating system. Third party devices include video cards, mp3 players, smartphones, displays or networking equipment.

You might end up with a system that is incompatible with some of the devices that you connect to the PC regularly or at least from time to time. The Compatibility Center for Windows 8 has been created to aid users in finding out if their hardware is compatible with Microsoft's upcoming operating system.

The compatibility center is only available online at the moment, with the likelihood that Microsoft will release a software version that runs on previous operating systems to simplify things for interested users. For now, you have to go to the web service's site and use it to find your devices and their compatibility status. 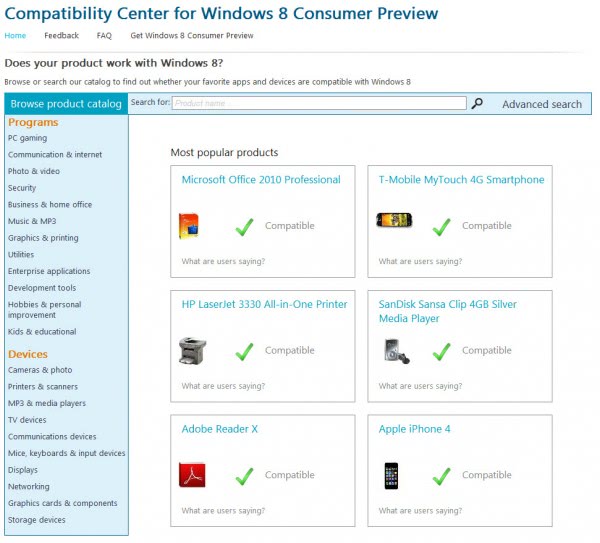 The Compatibility Center lists product categories, sorted into the two main groups programs and devices, in the sidebar on the left. Do not get your hopes up to high to finding all software known to mankind listed here though. You will find commercial software and free software in the listing, for instance Microsoft Office, Adobe Reader, ImgBurn or Opera. Other programs are not listed, like the great commercial video to DVD converter Convert X To DVD or the SMPlayer.

The same can be said for the hardware category where you find thousands of devices listed. It is more likely that you will find new hardware, than it is that you find older hardware listed there. You will find most smartphones, networking adapters and camera models in the listing, but older devices are often not listed. This is an issue if you are planning to upgrade an old system, like an old laptop that you bought in the year 2000 for instance.

The Compatibility Center can give you reassurance if you want to make sure that hardware or software that you use is compatible with Microsoft's Windows 8 operating system. (via Mike)