When I came to review the Windows 8 Consumer Preview I decided that the best way to do it was to split it into separate reviews for the different types of people who would use it, so between gHacks and our sister site Windows8News I've already written about Consumers, where the operating system got a resounding win and IT Pros where, frankly, it's still all to play for.Â  .

Business users are, and always have been, Microsoft's bread and butter.Â  If you think about it Windows has always been a business operating system and consumers have had to adapt to using a business system at home.Â  Now the pendulum has swung completely in the opposite direction, so what if anything does Windows 8 offer business users?Â  In many ways Microsoft don't need to worry about business uptake.Â  Most businesses are only still migrating to Windows 7 and so Windows 8, and possibly even Windows 9 will be skipped completely.Â  The financial markets and shareholders aren't going to criticise Microsoft when this happens as no medium sized or large business upgrades their operating systems every three years anyway.

Despite this, Microsoft have thrown in some very tempting features for businesses including Hyper-V and support for a new relational file system when used in conjunction with the new edition of Windows Server, also out at the end of this year.Â  Some of these new features could be very well received by system administrators and IT managers.Â  This enthusiasm will have to be tempered though with thoughts of retraining staff in how to use Metro and the new Start Screen.Â  With the Start Menu gone and no Group Policy setting to disable Metro there will be much scratching of heads at office desks where staff areÂ  suddenly presented with the new interface.

For this reason, as staff training is always expensive and comes with a significant hit on productivity, Windows 8 won't be a winner for business.Â  It could have been as consumer devices keep creeping into the workplace.Â  Last week however Microsoft announced that the new ARM version of the operating system won't come with the Administrative Tools or Group Policy settings.Â  This means that Windows on ARM willÂ be no more useful in the workplace than the iPad and some commentators have suggested that Microsoft is shooting itself in the foot by taking this approach.

Ultimately there will be scope for Metro apps to come along that will be every bit as useful and usable as their desktop equivalents, and I've seen how these apps can be genuinely powerful myself, but this will take some time.Â  It takes a long time, sometimes years, to develop bespoke apps but with the move away from Windows XP and Internet Explorer 6 now fairly urgent, there is a strong case to be made for considering Metro as the way forward.Â  It is much easier to develop cross platform apps for the PC on Intel/AMD, ARM and even Windows Phone and, unlike the desktop which now faces an uncertain long-term future, Metro isn't going to be going away.

At least for the next few years though Windows 8 is not a win for businesses.Â  There are too many problems associated with the way businesses operate at and the speed at which they develop and deploy things. 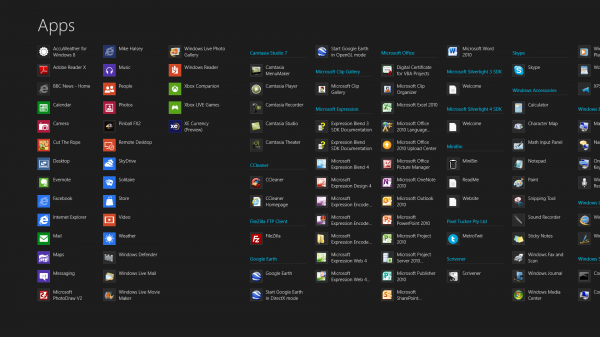 Previous Post: « Check if Your Devices Are Compatible With Windows 8
Next Post: « Test Your PC's Hibernation and Sleep Functionality With Sleeper