Three years ago this month I began doing some very serious planning.Â  Back when Windows Vista was released I wrote a 68 page "Vista Power Users Guide".Â  It wasn't very in depth but was intended as a getting started eBook and was primarily written to help stop friends and family from calling me with tech questions when I was out with friends, each of which would "only take a minute"Â  ;)Â  It was very well received though and I decided early on that when the next version of Windows was released I would write a proper book for sale.

Getting a book contract at this point proved pointless, though I did try.Â  I hadn't proved myself so eventually in 2008 I decided that self-publishing would be the way forward.Â  Thus in January 2009 when the Windows 7 beta appeared I began designing page layouts, insert graphics and a draft table of contents for what would be my "Windows 7 Power Users Guide".Â  I went through several drafts and designs when writing the first three chapters but eventually found my stride and on August bank holiday, shortly before Windows 7 was released to manufacturing, I released my new eBook and paperback for sale.

As a way of making money they were never going to be the route to my next foreign holiday, and the eBook was made free a year later.Â  As a 170 page book however I felt that perhaps I could use it to prove my mettle and began contacting publishers through the submission links for new authors on their websites. 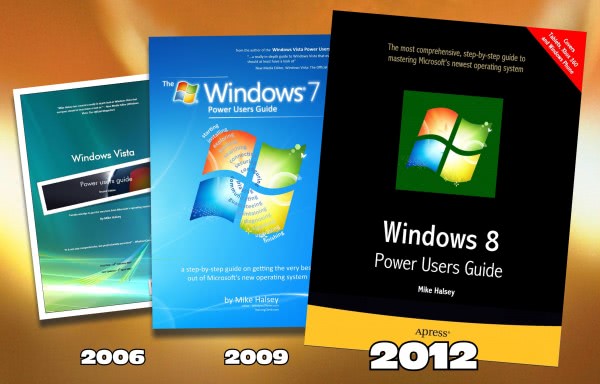 There were a few knock back emails I received, and some emails went unanswered but eventually a nibble came in the form of an email from a senior editor at Microsoft Press.Â  They were looking for someone to write a Windows 7 Troubleshooting book and wanted to know if I was interested.Â  Two months later the contract was signed and "Troubleshooting Windows 7 Inside Out" was published in October 2010, one year after the release of Windows 7.

Since then I've been able to better enjoy the fruits of my labour.Â  I wasÂ given a Microsoft MVP (Most Valuable professional) award in the Windows Expert category in January 2011 and this was recently renewed for a second year.Â  I've also spent the last year receiving review hardware from companies including Samsung, ASUS, Nokia and HTC and have had a great many Windows Phones, laptops and more through my door to play with (a very pleasant perk of the job).

Now my Power Users Guide has been formally picked up by US publisher APress and the "Windows 8 Power Users Guide" is scheduled for release this year to coincide with general availability for Windows 8 itself.Â  I'm also working on an eBook project for Microsoft Press' parent company O'Reilly for whom I am continuing to run a monthly series of help and how-to webcasts.Â  In addition I was last year signed by a new publisher, co-founded by the man responsible for making the Dummies books popular, and where Ed Bott is now Editorial Director, and my first eBook for them "Need2Know Office 365 Security Essentials" was released last November.

In short the last three years have been amazing (though very hard work too) and I thought I'd throw down the gauntlet and encourage you to get here too, after all, if I can do it anybody can!Â  Have you ever wanted a book contract of your own?Â  Do you want to write about Windows 8 or perhaps the next version of Microsoft Office?Â  If you do then now is the time to start planning as the public beta for Windows 8 will begin at the end of February.

Writing a book, even one as small as 170 pages (I know, it sounds ridiculous to me too) isn't easy, doubly so if you've never done it before.Â  It will monopolise your time and you can expect to spend three months writing it in your spare time.Â  If you have a book about Windows 8 in you though I strongly encourage you to write it.Â  After all, you never know what opportunities it might open up for you.Â  The rewards can be unexpected and very welcome, and the feeling you get from helping people is worth it on its own.Â  ;)Â  I'd love to read your Windows 8 books later this year and see your particular spins on the format.Â  Good luck all.

Previous Post: « What's in the 2012 MVP Award Pack
Next Post: « Is it Time to Offer an Alternative to QWERTY?