Facebook Users Can Soon Listen To Music With Their Friends

When I discover a great video or music track on the Internet I often want to share it with friends who I know have a similar taste when it comes to entertainment. What I really like to do is to watch videos together with friends. This works considerably well as we are often using Teamspeak or comparable voice over IP software for communication.

Facebook has just announced that the company will soon enable a feature on the social networking site that allows users to listen to music together on the site. Friends currently listening to music will have a music icon next to their online status in the Facebook sidebar.

Just hover with your mouse over the username and click on the listen with button to listen to the same music your friend is listening to.

The music will automatically be synchronized so that you start listening to the music at the same position that your friend is currently at.

Alexander Roche's blog post at the official Facebook blog even hinted at the possibility that it will be possible to listening to music in groups, with one friend playing the DJ while everyone is listening to the music.

Information about the current session can be displayed in chat, with the possibility that other users join in to make it a group listening experience and chat session.

Music is powered by third party applications that users need to first enable on their accounts before they can listen with others to the same music.

Facebook notes that only "the people you've shared your listening activity with can see when you're listening with a friend". General privacy related settings for the application can be set under App Settings which for instance allows you limit music information to just yourself or a close group of friends. 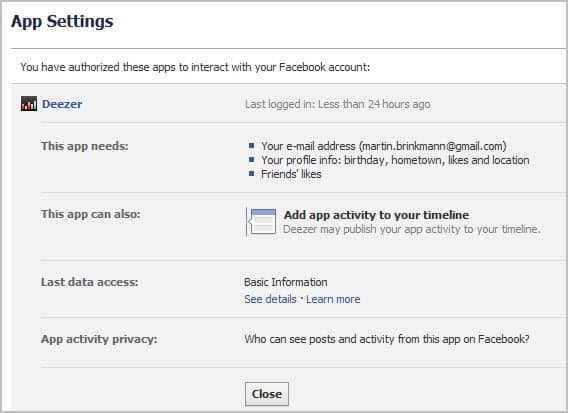 The new feature is currently being rolled out. Official information indicate that it will take a few weeks before every Facebook user can make use of the new feature. This only affects Facebook users who have a music app installed or will install one on the site.

What's your take on the new feature?