Today I tried to install the Adobe Flash Plugin for Microsoft's Internet Explorer. The basic idea was to download the executable, run it and have Flash installed. The problem was that somehow the whole process got corrupted which had several consequences. The Flash Player installation running in the background was creating new temporary Flash executables in the temporary cache directory. When I tried to terminate the process via Windows Task Manager I received the message that access was denied. This happened with the online installer. I received the message "Unable to Terminate Process The operation could not be completed The operation is not valid for this process".

I'm not sure what caused the issue, but what I did know was that I had to stop the installer from creating new Flash installer instances on my computer. With Windows Task Manager out of the picture, I had to find a way to terminate the process. 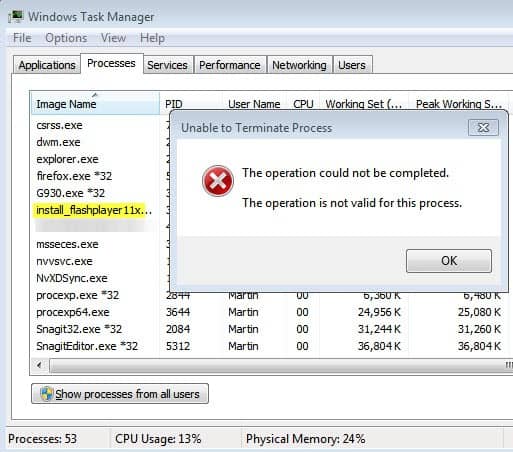 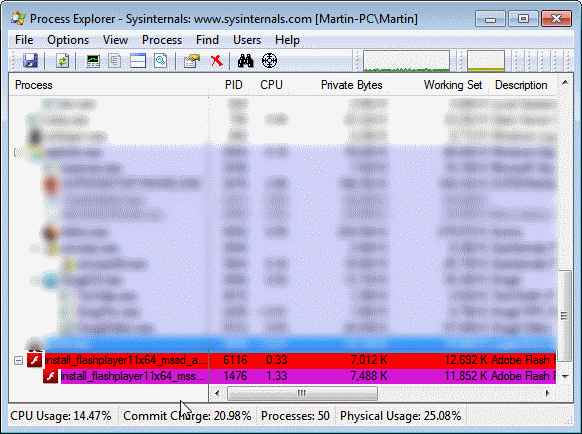 Other programs, like Process Lasso, Kill Process or the recently reviewed Daphne may have also been able to terminate the rogue process.

I have learned two things this morning: First, that Windows Task Manager is not almighty when it comes to terminating processes on Windows, and second that it is definitely better to download and install Adobe Flash Player offline installers.

Did you ever encounter a process that you could not kill? What did you do to resolve it?

Previous Post: « Monitor and Troubleshoot Your PC's Operations in Real Time
Next Post: Notepad++ Not Starting Up? Try Disabling Plugins »