Some of you may have encountered spyware, viruses or trojans on your system that spawn another process whenever you attempt to kill it so that it seems impossible to kill a process completely on the system.

It is not possible to kill more than one task with the Windows Task Manager which is a bit unfortunate and since programs are usually faster than humans, it is almost impossible to kill all the processes in one go without them spawning new ones.

Kill Process is a process manager developed by Orange Lamp Software Solutions. The main purpose of the application is to provide the user with means to kill several processes at once and it can also prevent that new blocked processes are spawned on the system. That second feature comes in handy in numerous other occasions, more about that later.

The main interface of Kill Process displays a list of all processes that are currently running on the system. The list contains information about each process that includes its name, description and memory usage. Detailed process information are available by selecting the process and hitting enter or right-clicking it and selecting Process Information from the menu. 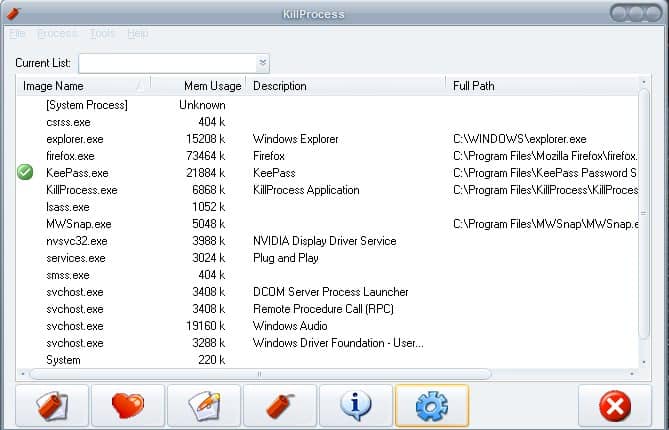 Processes are automatically added to the kill list once they have been marked for termination. The kill list can contain multiple processes that can be batch killed easily. This comes in very handy if you want to kill processes that spawn another instance of related processes. If you only use this feature Kill Process stops after killing the selected processes, even if a new process that is in the kill list spawns.

This can be prevented by the second feature of Kill Process: Process Scanning. If you activate Process Scanning Kill Process with actively scan the system for processes in the kill list and terminate those processes as soon as they appear as a process. The time between scans can be defined which is essential to prevent cpu overload.

This feature comes in handy in a number of occasions. Say you want to get rid of that dreaded ctfmon.exe or other processes that appear every time Windows starts and you do not know how to suppress them. It is also possible to prevent that applications that you start spawn new processes.

Kill Process can be configured to run silently in the background by suppressing all errors and disabling confirmations.

Martin Brinkmann is a journalist from Germany who founded Ghacks Technology News Back in 2005. He is passionate about all things tech and knows the Internet and computers like the back of his hand. You can follow Martin on Facebook or Twitter
View all posts by Martin Brinkmann →
Previous Post: « Windows Search Replacement Fileseek
Next Post: Windows Shell Enhancer »