I reviewed the Personal Blocklist extension for the Chrome web browser back in February of this year. The extension offered to block specific domains from appearing in Google's search results. Blocked domains and sites would simple be removed from results pages. One of the issues I had with the extension was that alternatives were not loaded for each blocked site. This could lead to the undesirable result that all ten organic search results were blocked so that only Google ads were shown on a search results page.

Google first started comparing and later on using the information provided by Personal Blocklist users into their search engine ranking algorithm (which added another weapon to the arsenal of black hats).

A month later Google began to add options to block sites from the search results directly. Users who visited a site from the Google results and clicked on back in the first seconds of visiting that site were greeted with a "block all domain results" link under that site's search engine listing.

Yesterday Google made the announcement that users of the Personal Blocklist extension for Google Chrome can now export the blocked site data to their personal Google account.

For that they need to click on the red extension icon in the Chrome interface to bring up the list of blocked sites.

A click on Export opens a second window where the data can be copied to the Clipboard or exported to Google. Users who select the second option will see a prompt asking them if they want to disable the Chrome extension after exporting the data to Google. This obviously makes only sense if they stay logged in while searching on Google. 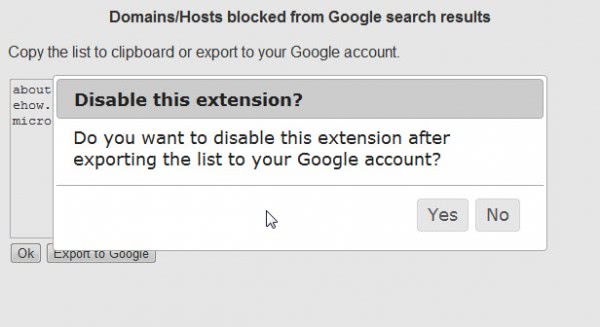 All blocked domains and sites are listed in a review window afterwards. Here it is again possible to unblock some sites so that they won't be imported into the personal Google account blocklist.

Google users should note that the maximum amount of blocked sites is 500 currently.

The core benefit of moving the blocked sites data from the Chrome extension to the Google account is that the search engine results of the latter will always display ten organic search results.

Google users who do not run Chrome can add domains and sites to their blocked sites list with a click on the Settings icon, selecting Search Settings and clicking on Manage blocked sites in the new window. (thanks Venkat)