If you are not visiting Facebook on a daily basis, you may have had to read a lot of news stories that have accumulated since your last visit.

Facebook then did not sort the stories on your homepage which meant that you had to go through everything to find the news that were interesting to you.

That may not have been a problem for Facebook users with friends who use the social networking site as sparingly as they do, but with hundreds of friends who are active on the site, it could very well mean to spend a long time reading through those news posts.

Facebook yesterday announced a change that aids users in this regard. The top stories from the last day, or another time period, are now shown at the very top of the news feed. Users who spend most of their day on Facebook will still see the old layout with the most recent news on top.

The blog post over at the Facebook blog does not reveal much about the algorithm that determines if a story should be displayed as a top story on Facebook.

One element that is likely playing a role is the ability to dismiss a top story. It is likely that Facebook is using those information to promote future stories.

Each top story on Facebook is indicated with a blue corner. A click on that corner dismisses the story and removes the top stories indicator. 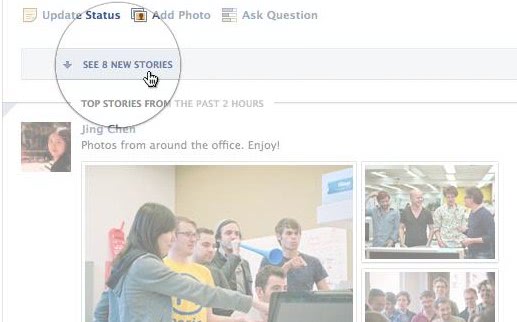 The second addition is a real-time news ticker that is displayed in the right sidebar on the Facebook site. This basically returns activities of a user's Facebook friends in real-time.

Ticker shows you the same stuff you were already seeing on Facebook, but it brings your conversations to life by displaying updates instantaneously. Now when a friend comments, asks a question or shares something like a check in, you'll be able to join the conversation right away. Click on anything in ticker to see the full story and chime in – without losing your place.

The idea to filter news posts by importance makes sense. The algorithm on the other hand may need some tweaking as it seems to promote stories that one would not necessarily call important. I for one would love to see a language and content filter to fine tune the top stories selection. This could allow users to block certain types of stories, e.g. photo uploads from being promoted to top stories on Facebook.