I have to admit that I'm not a huge fan of the Facebook sidebar ticker that is now being displaying on every page on the social networking site. The ticker displays the latest activities of friends on Facebook. The annoying thing about it is that it updates in real-time, which means that you see constant movement in the ticker area if you have active friends on Facebook or a lot of them.

To make matters worse, there is no option to halt, disable or hide the ticker on Facebook. Some Facebook users think that this is an oversight on Facebook's part.

When you look at the Userscripts website you will notice more than a dozen scripts that promise to remove the ticker from Facebook. I have tested about six and noticed that many did not work properly. I finally discovered the Facebook Side Ticker remover userscript which works exactly as advertised. 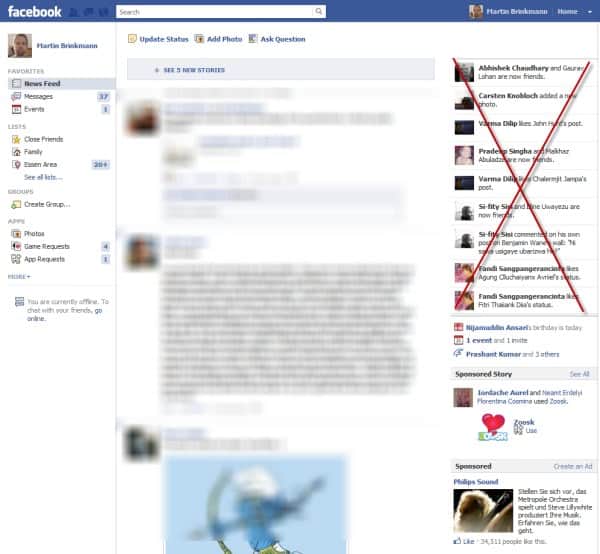 It automatically hides the news ticker on all Facebook pages. All that you need to do for that is to install the userscript in your browser.

I have only tested it under Firefox, it is however likely that it will work under Google Chrome and Opera as well.

Firefox users need to install the Greasemonkey or Scriptish add-on before they can install userscripts. Once done all that is left to do is to go to the Facebook Side Ticker website on the official Userscripts repository website to click on the Install button there.

The script only requests access to Facebook urls which is exactly how it should be handled. More interesting than this is that it is only a single line of code that is hiding the ticker on Facebook.

The ticker on the right side is hidden automatically most of the time. I experienced one or two situations where it remained on page after the page loading finished. A simple reload of the Facebook page was then enough to hide the ticker again.

I suggest you give Facebook Side Ticker Remover a try if you are annoyed by Facebook's new real-time ticker.

Update: While the script has not been updated for two years, it is still working fine as of today (March 31, 2014). It still hides the ticker on Facebook so that it is not displayed anymore to you.