by Martin Brinkmann on September 11, 2011 in Software, Windows - 4 comments

Recording Internet Radio streams is without doubt one of the best ways to increase a music collection legally. While I cannot vouch that recording the music is legal in all countries of the world, I know that it is in many.

And instead of just recording one stream and thus one song at a time, you can use specialized programs like StreamWriter to download music from multiple stations at the same time.

StreamWriter has just been released in version 3. The multi-stream recorder is one of the most comfortable programs to record radio streams from the Internet. The program has come a long way since its first release which we reviewed in 2010 here on Ghacks.

The program's core functionality was available back then as well. You could use it to record multiple radio stations at the same time and cut songs in the program, for instance to remove advertisement or moderators. 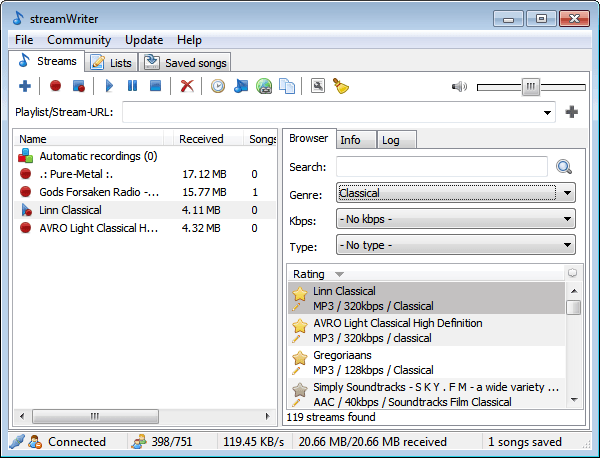 New features were added over time, like scheduled recordings to never miss your favorite radio show again or a wishlist of songs that get recorded when the songs are playing on one of the monitored radio stations.

StreamWriter 3.0 now improves the program further. The version is a culmination of previously released fixes and several new features, among them the ability to add already recorded songs to the ignore list to avoid recording them a second time, or the new per-stream ignore list.

Radio stations can be added via the playlist / stream url form directly, or from the radio station browser. Everything is well thought out and comfortable to use. To record radio, you simply double-click a station in the list. Everything else is handled automatically by the software. Back then I tested the recording capabilities and stopped at 15 simultaneous recordings. There does not seem to be a hard limit though.

The new version of StreamWriter improves the program further, making it one of the best, if not the best, applications for recording Internet radio on the PC.

The new version of StreamWriter can be downloaded from the official project website. It is available as a portable version and installer. You may also want to check out my Download Free Music Legally guide which offers more tips and program links.

Martin Brinkmann is a journalist from Germany who founded Ghacks Technology News Back in 2005. He is passionate about all things tech and knows the Internet and computers like the back of his hand. You can follow Martin on Facebook or Twitter
View all posts by Martin Brinkmann →
Previous Post: « How to Hack the Windows Experience Index
Next Post: EFS, and why you shouldn't ever use it! »