EFS, and why you shouldn't ever use it! - gHacks Tech News
ghacks.net

EFS, and why you shouldn't ever use it!

Yesterday I wrote here about the BitLocker security file encryption system that was introduced with Windows Vista.  BitLocker is a full-disk encryption technology but I also alluded to problems with Microsoft's other encryption technology, EFS (Encrypted File System).  EFS has been with us for over a decade now and has slowly been improved by Microsoft.  I believe that it's an extremely good idea to encrypt your files and data, especially if you have a laptop, but certainly anything personal or financial on your main PCs if at all possible, or to at the very least make your PC secure with a strong password.

I would never recommend anybody ever use EFS however and here's why.  I'm extremely good with backups, I tell people all the time to make sure that they have adequate backups of their files and documents and I practice what I preach.  I use Windows Live Mesh to synchronise my documents, music and pictures between my main desktop and my laptop.  My main desktop then backs everything up to a second internal hard disk and also an external NAS (Network Attached Storage) drive.  I then have a secondary NAS drive which I keep off-site which I bring back every month or so to update the backup on that.  This is the way I recommend everybody does backups; though USB hard disks are just as effective as NAS drives and much cheaper. 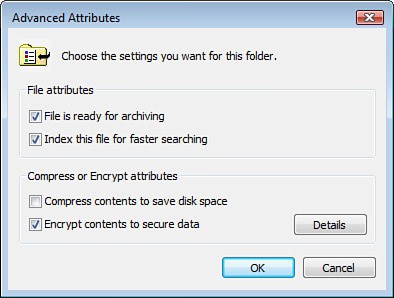 The problems occur because EFS will encrypt any file that resides on an NTFS formatted disk, the default formatting option for XP, Vista and Windows 7 and also for the vast majority of USB hard disks and some NAS drives.  Unfortunately, because of incompatibilities with some differing versions of EFS files can end up scrambled and unrecoverable.  This wouldn't happen on a USB hard disk but I found it occur on my NAS box.  This means that if something goes wrong and you need to recover the backup from the drive, even the appropriate EFS key, that you would clearly have backed up and kept safe, won't unlock the files.  They will simply be lost and gone forever.

There's no way to know on what devices the EFS file scrambling will happen either.  With non-EFS supported devices, ie those that aren't formatted with NTFS, Windows will ask if you "want to copy the files without encryption" and will decrypt them on the fly.  Unlike BitLocker however, which just encrypts the hard disk, EFS encrypted files remain encrypted when copied off the machine to another NTFS formatted disk.

There are other problems with EFS too and these include metadata.  The EFS system, for reasons I've never been able to ascertain, is incompatible with the metadata you add to certain file types, pictures and photographs especially.  Not only will it strip out the metadata from these files, it will modify the files in such a way as to prevent you from adding the metadata back in afterwards, effectively making the file useless to you if this is how you like to organise your photos and pictures.

All of this comes from my own personal experience and it shows how even technical experts can be caught out by hardware and software incompatibilities and faults in, seemingly secure Windows features.  I would not recommend you ever use EFS.  If you have a laptop or desktop machine with a TPM chip and a copy of Windows Ultimate or Enterprise, use BitLocker.  If not the excellent TrueCrypt is a free utility that comes highly recommended by security experts worldwide.