Portable software per definition does not store data on the operating system, only in its program folder. That's a problem when it comes to launching files with portable software, as default program information are stored in the Windows Registry. Some users break the rule and assign file extensions to portable applications via Windows' options. Others help themselves by installing a clean version of the program that registers the file associations but only allows once instance of the program to run at a time so that they can run the portable version. Firefox and Thunderbird come to mind.

The free software eXpresso offers a third option. The portable program acts as a proxy that can register file extensions with selected applications. This way it is possible to assign file extensions to portable applications or installed programs, provided that eXpresso is running in the background.

So how does it work? EXpresso taps right into the standard Windows file launching routine. It becomes active whenever a file is launched that has no association yet in the program's database. 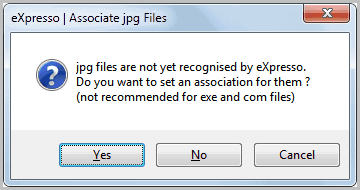 It is then possible to associate the file extension with another program. This opens a standard file browser to select a software from the computer system. The new program can be portable or installed. You need to make sure that the selected program supports the file extension. It is furthermore recommended to assign no new programs to executable files.

An alternative option is to associate file extensions with new programs in the program options. This speeds up the process as it is possible to add multiple file extensions in rapid succession.

EXpresso saves the information as relative paths in its program folder. The new file associations stay active for as long as the eXpresso program is running in the background. Once it is closed the old associations take over again.

Hotkeys are available to launch the selected file extension in an alternative application or the system's default program. Holding down Shift launches the file in the default program, the Alt key on the other hand launches it in the second alternative program if one is configured in eXpresso.

The initial configuration takes some time, and it is suggested to configure the majority of file types in the program options and not via the program's monitoring feature. There does not seem to be an option to pause the monitoring, which means that the window to associate a new file extension will come up frequently in the beginning.

The program offers several advanced features, from editing path information of previously configured applications over monitoring specific windows to the convey feature which allows you to send a file to "any app with the Send To context menu in Windows".

The freeware eXpresso is compatible with 32-bit and 64-bit versions and editions of the Windows operating system. This includes full compatibility with Windows XP, Windows Vista and Windows 7. The software can be downloaded from the developer website over at gluxon.com.