Like automated computer translations, text to speech applications are offering a solid but far from perfect result. Still, if you had to choose between not understanding or reading at all and computer aided options you'd probably pick the computer aided ones.

Balabolka is a free text-to-speed software for the Windows operating system. The program makes use of all computer voices that are installed on the PC which means that it is possible to install additional free or commercial speech packages to improve performance or add support for different languages.

The interface looks very much like a standard notepad interface with the exception of a "speech" pane near the top. Users can select A Microsoft Speech API (the choice was SAPI 4 or 5 on Windows 7 Pro) and a voice package from a pulldown menu. It is furthermore possible to change various settings that affect the voice and speech, for instance the reading speed, pitch or volume. 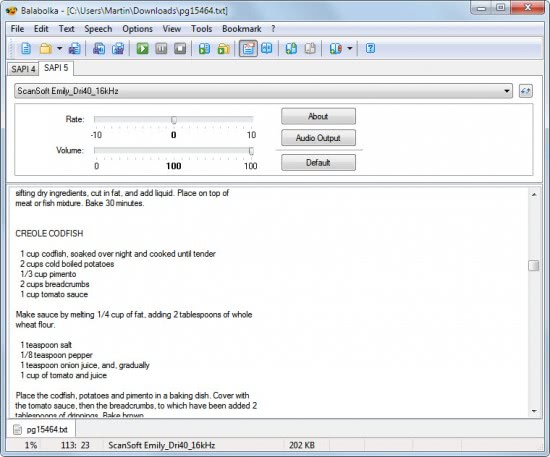 Balabolka supports many different file formats from plain txt to HTML, pdf, docx, epub and fb2 to archive formats such as zip and rar.

Options to read aloud, stop and pause are available in the interface and also via keyboard shortcuts. One interesting option is the ability to save audio files which basically means that users can turn supported text documents into audio files such as mp3 or wav. That's interesting for users who need to read / listen to something but prefer to do so while on the move.

Outputs can get rather big depending on the size of the text file. Balabolka can split audio files into multiple parts. 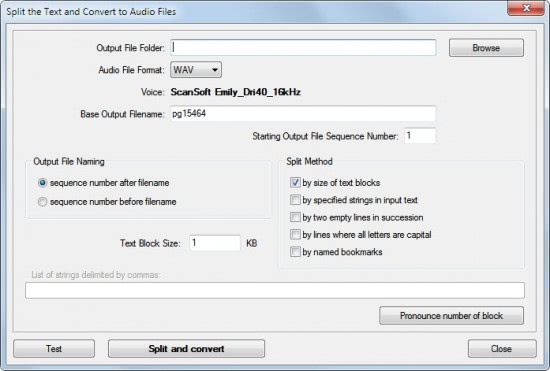 The developer links to several free and commercial voice files that can be downloaded to add various languages the application. It is recommended to download at least one or two as they tend to make a huge difference to the standard voice included in the operating system.