Windows Home Server administrators surely know about Drive Extender which can be used to combine multiple hard drives into one combined virtual hard drive. This simplifies the accessibility and management of data on the Home Server. A music or video buff with split the collection on multiple drives because of space constraints could use Drive Extender to access all media files under one drive letter.

If Microsoft cannot deliver other companies can. Drive Bender was recently announced which is "inspired by Microsoftâ€™s Windows Home Server Drive Extender technology. Drive Bender will provide "the same level of functionality, and more, for all versions of the Microsoft Windows".

The homepage does not contain more information than that currently. A first beta release is scheduled for February 21.

A second Drive Extender alternative is StableBit's DrivePool, an add-in for the Windows Home Server 2011.

This add-in will let you add multiple hard drives into one combined storage pool on the Windows Home Server. You can create folder shares on this storage pool, and each folder on the pool can either be duplicated or not duplicated. Files placed in duplicated folders will be protected against single drive failure by being placed onto two separate hard drives 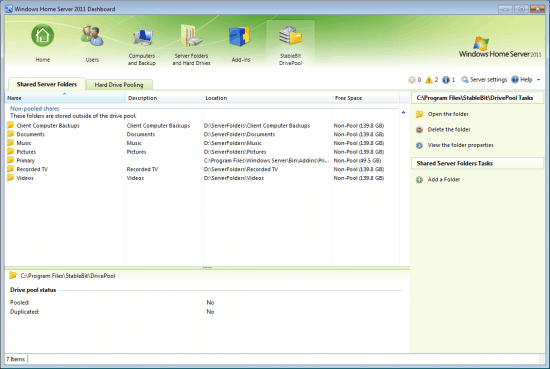 Features of DrivePool are:

DrivePool supports mixing different hard drives and sites together. Basically, any non-removable NTFS formatted drive will be compatible. A technical preview has been announced for the coming weeks.

It is likely that both products will not be free. The ballpark figure given by the developer of DrivePool is $20. Those two programs could provide the missing functionality for Windows Home Server users who are actively using Drive Extender currently.

Do you know of other Drive Extender alternatives? Or are you considering different home servers? Let us know in the comments. (via)