Jojo mailed me yesterday with some interesting information about AVG's latest free antivirus software. I could not believe it at first, but confirmed it after installing AVG Free on a test system. Basically, Jojo mentioned that AVG was running eight background processes after installation, and that it's size of installation was exceeding the 500 Megabyte mark, with the majority of that installed on the system drive, regardless of the drive selected during installation.

That did not sound well, and it frankly reminded me of Nero and how the company turned a lightweight and excellent CD and DVD burning software into an overweight beast.

AVG 2011 Free can be customized before installation. Doing so provides options to install it on a different drive, or add and remove features from the program before installation. If you remove features you are likely to end up with a lower size on the computer's hard drive and less background processes. For the sake of this article though, I have decided to install all suggested modules. I did however select an installation directory on another system partition and decided to remove the AVG widget from the installation. The widget basically offers options to quickly run a scan and see if the system is protected, nothing that you cannot find out by clicking on the AVG icon itself. And AVG will notify you if it encounters problems.

Lets take a closer look at the components that are installed by AVG Antivirus Free: 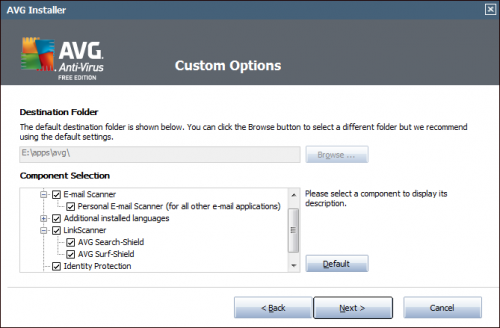 AVG downloads roughly 130 Megabytes during installation, if the offline installer was used to install the antivirus software. 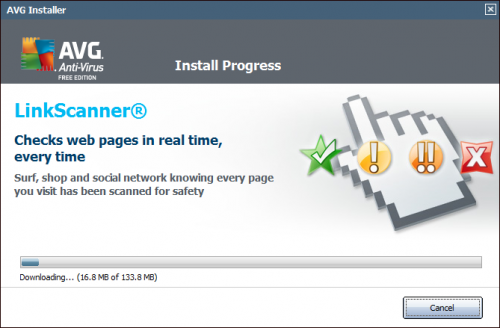 The size on the hard drive however turns out to be more than that. The AVG installation folder on the hard drive will use roughly that size alone. What's puzzling is that AVG creates another folder on the system drive, regardless of the selected installation path. This additional folder is located in Users\All Users\AVG10 on Windows 7, and uses 302 Megabytes on the hard drive. That's a lot. Most of the space is taken by the SetupBackup folder. I assume that folder is there to prevent the user from having to download the setup files again when making changes to the antivirus software. It takes up 223 Megabytes on the system partition. The second biggest folder is the update folder with a size of almost 70 Megabytes.

It is definitely not a good practice to store files of that size on the system partition, especially not if the user has selected a different partition for installation of the software. At least a notification should be displayed to inform users of this fact.

Another annoying thing is that it is not possible to reduce the number of processes by disabling features of the program. I would expect that disabling Identity Protection would remove the AVGIDSMonitor.exe process. This is apparently not the case.

The processes do not seem to be using lots of resources, at least not when they are idle. The biggest idle processes are avgui.exe followed by AVGIDSMonitor.exe and avgtray.exe.

The biggest problems that I see are the massive size of the setup and update files on the system partition, and the number of running background processes.

What's your experience with AVG's latest antivirus software? Let us know in the comments.