Security software like A-squared Anti-Malware protect the computer system from threats and attacks not only on the Internet but also locally.

Update: Please note that A-Squared Anti-Malware is now known as Emsisoft Anti-Malware. You can check the program's latest performance protection-wise on the www.av-comparatives.org/ website.

Unlike its name might suggest a-squared Anti-Malware makes use of two scan engines to protect, detect and remove trojans, viruses, spyware, adware, worms, bots, keyloggers, rootkits and dialers. The software combines the A-squared Anti-Spyware and the Ikarus Anti-Virus engine without the usual disadvantage of increased scanning times.

The installation of a-squared Anti-Malware requires the creation of an account and a somewhat extensive configuration. It is there that various security modules, notification settings and auto update settings are configured. These settings can be later edited in the program's interface.

The program interface displays a left sidebar and a main area that changes depending on the selection in the sidebar. The security software always starts with the Security Status which displays the status of the background guards, the program version, last update, license information and the time and date of the last scan. 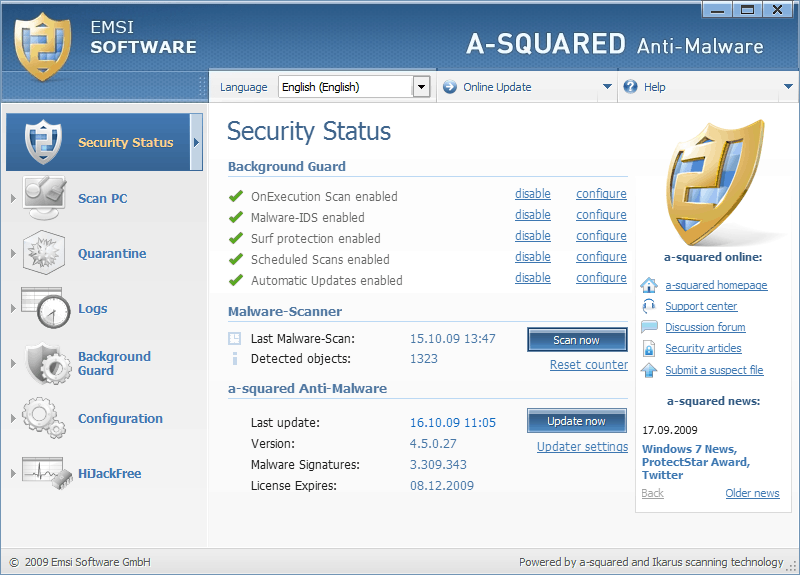 Each background guard can be configured and activated (or deactivated) in this menu. A-squared Anti-Malware uses five background guards of which two are used for scheduled scans and automatic updates. The three other guards are used to scan files on execution, use heuristics to detect unknown malware and surf protection to protect the user from Internet threats.

Where a-squared Anti-Malware really shines are the configuration options for those background guards. The Malware-IDS guard for instance uses heuristics to monitor malicious activity. The configuration of this module allows the user to configure exactly what the intrusion detection system should monitor. It is for instance possible to disable keylogger or hosts file monitoring. This would make sense if another program was installed that would already monitor those areas.

Those in depth configuration settings are available in other modules as well. The computer user can configure the surf protection guard to block, alert or don't block various threats and hosts on the Internet from ad or tracking hosts to phishing and fraudulent hosts; Each with their own action defined. This is a powerful way of protecting the computer from web surfing threats. 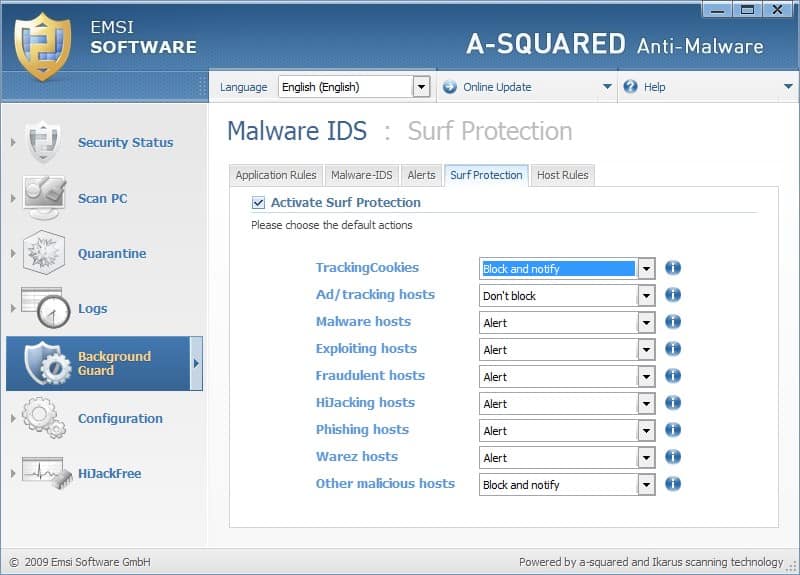 Another example of this is the on execution scanner which can be configured extensively. It is for example possible to configure application rules to monitor, block or allow specific applications, use the a-Squared community as a guideline to allow or block programs from being executed and even activate paranoid mode which will display a lot of alerts to the user.

Scans are scheduled by default but can be executed manually all the time. Four types of scans are available that range form a quick scan to a deep and custom scan. A quick scan will only scan the active programs and some other locations and files while a deep scan will scan all files on the hard drive. This obviously has an impact on the time it takes to complete the scan.

A-squared Anti-Malware comes with an additional program called a-squared HiJackFree which can be used to display information about processes, ports, autoruns, services, hosts, Windows Explorer add-ons and ActiveX components. The program is available for free at the Emsi Software website and can be very helpful in aiding a manual analysis of specific files.

A 30-day trial of Emsisoft Anti-Malware can be downloaded from the developer's website. It is also possible to download a free version of the security program which does lack the realtime protection.