Google Chrome Gets Option To Free Up Memory

The memory usage of modern web browsers has increased quite a bit over the years which can be attributed to the increased functionality, but also to plugins and extensions that use computer memory as well when the web browser is running.

And then there are browsers that use multiple processes in an effort to increase the security and stability of the overall program.

The keyboard shortcut Shift-Esc will open the Google chrome task manager. It displays the memory usage of the plugins, tabs and the core browser. You can open it with a click on Menu > More Tools > Task Manager as well.

The task manager lists the page, browser extension, browser core or plugin, and the memory and cpu usage of each item. Initially Google Chrome users had only the option to end a process listed but the latest Chromium builds come with an improvement. 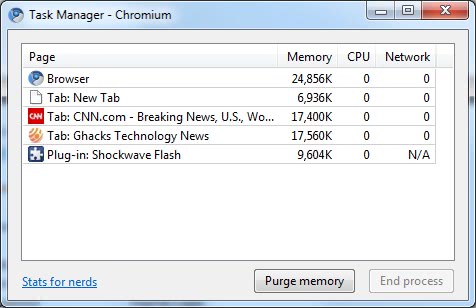 The developers have added a purge memory button to Chromium which may eventually be included into Google Chrome builds as well. For now it has to be activated with the startup parameter --purge-memory-button.

A click on the button will free up memory in Chromium which can be very interesting for users who work with the web browser all the time and experience high memory usage because of this.

Firefox users have a similar option with the third party program Firefox ultimate Optimizer which can drop the memory usage of the web browser significantly.

Users who are interested in this new feature have to download a Chromium build for now as this is the only version that supports the purge memory startup parameter currently.

Update 2: The startup parameter has been removed from Chromium and thus also Google Chrome. There is no option anymore available to re-introduce it in the browser. I suggest you check out the Chrome extensions listed below in the first update of the original article to tame Chrome's memory usage.

Update: The Purge memory button is now available in all versions of the browser, be it Chrome or Chromium. It still needs to be activated with the startup parameter, but once that is out of the way, becomes available in the Task Manager of the browser.

Clearing memory can help free up memory temporarily while using the web browser. It may not be the best option in many situations, as memory usage will slowly creep up again with use.

Alternatives are provided by browser extensions like TabMemFree or OneTab which can unload tabs in Chrome to free up most of the memory they have occupied.

Article Name
Google Chrome Gets Option To Free Up Memory
Description
The article looks at a -- now removed -- feature of Google Chrome which allowed you to purge memory in the browser to free up RAM.
Author
Martin Brinkmann
Publisher
Ghacks Technology News
Logo