Running applications using Windows Virtual PC can be beneficial if the application - or hardware - is not compatible with Windows 7. Most Windows users will probably never come in the situation that they need to run the mode but those that do can download the required software to launch applications in the virtual environment with just one click in Windows 7. 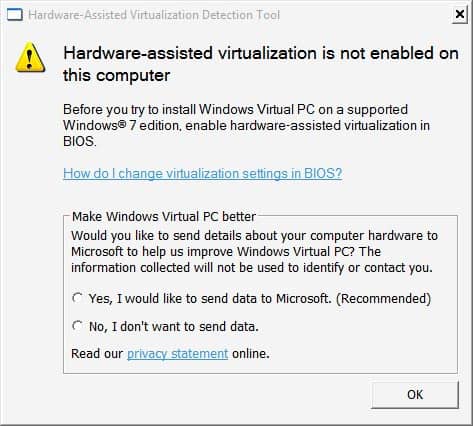 The program is compatible with all editions of Windows 7 as well as Windows Vista SP1 or SP2 and Windows XP SP3. The Hardware-Assisted Virtualization Detection Tool is a portable software program that will display the relevant information upon startup. It will either display that the cpu supports Hal and that it is enabled, that the cpu supports Hal but that it is not enabled in the Bios, that the cpu does not support Hal or that the operating system version is not compatible with the program. Information are provided for the second case.