Indo Cleaner is a privacy software that can deal with most recently used file listings. It basically is a cleaner that checks various lists for entries giving the user the option to delete some or all of them so that they cannot reveal any information about which files have been opened in the past. All available mru lists are selected by default after installation and start of Indo Cleaner. This includes Windows Explorer, Internet Explorer, Microsoft Office and Windows Media Player but also Firefox and Opera. It is possible to uncheck any of the programs listed to prevent the lists from being cleaned up. 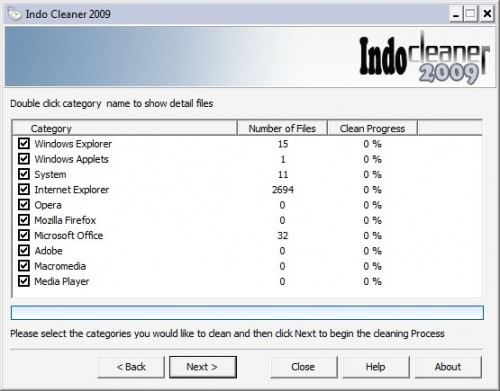 The remaining most recently used lists will then be checked and the number of entries that are stored in the Windows operating system are shown. Here it is again possible to uncheck some programs or proceed with the cleanup to delete the selected recently used files.

Indo Cleaner is not the only privacy software that can clean the most recently used files. Ccleaner is for example another program that can delete those files. Indo Cleaner is compatible with Windows XP and Windows Vista (and likely Windows 7).

Update: IndoCleaner is no longer available, the website returns a 404 not found error. I suggest you use the excellent CCleaner instead. CCleaner is a sophisticated temporary file cleaner that is the top of the class product.

Previous Post: « JumpTo Lightweight Launcher For Windows
Next Post: « Detect If A PC Can Run Windows XP Mode In Windows 7