File Blender is a portable software solution to convert and process file types in the Windows operating system. Unlike other tools of its kind it is highly configurable through various format packages. What this means is that a user can either download File Blender with all supported conversion packages (images, audio, pdf/tiff and js/css) or only some. It is even possible to add other converters to the program if they support command line operations.

The File Blender interface consists basically of a big area where files can be dropped into. The program will automatically recognize the file type if it is supported and display an action menu with the available options to convert the file. Actions for mp3 files would for instance be to convert them to either wav, flac or ogg. 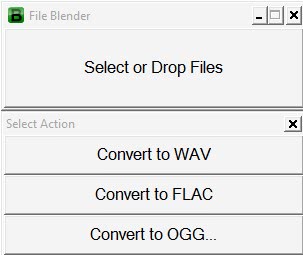 A right-click on the drop area or the actions displays a context menu with options to edit the action file for a specific conversion or the main program ini file. One of the more interesting options of File Blender is the ability to "minify" CSS and Javascript files that are dropped into the interface. It is also capable of splitting and joining pdf and tif files.

File Blender is compatible with most Microsoft Windows operating systems. It can be downloaded from the developer's website

Update: File Blender has been updated several times since the first review back in 2009. The latest version, File Blender 0.33 at the time of writing, has been released in 2011. The basic functionality has not changed. You can still drag and drop files into the program interface to have them automatically converted or processed by the application. The number of supported file formats seems to have improved in recent versions.