We have seen a few tries at creating one installer that would allow a user to install multiple popular software programs at once. Most of these programs were taken down after a while due to legal issues that some software developers had with the way their software was distributed. The new service Volery tries a slightly different approach. Instead of offering an installer that comes with all the software already included it offers to create a customizable installer at the Volery website.

The customization is as easy as it can get. All the user needs to do is to pick the programs that should be included in the installer. This installer can then be downloaded to the local computer system. The installer itself has always the same size of 159 Kilobytes. It currently contains the names of all programs that get installed. The developers should probably rethink that naming convention as long names can cause all kind of difficulties on some systems (next to looking confusing and slightly spammy). 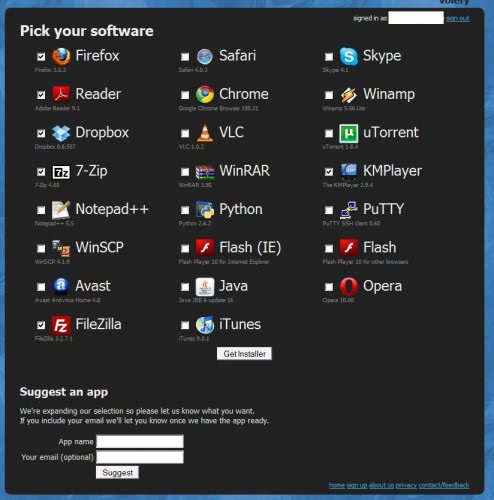 The installer will then start downloading the programs which means that an Internet connection is required. The programs are then installed one by one on the local computer system. The benefit of this approach is that users can customize programs that they want to install. Silent installs are used and all the usual add-ons like toolbars or other questionable content is not installed in the process.

The service is currently in private beta which means that only beta participants can try it out. The amount of applications that are currently offered are limited but the developer's promise to add additional programs to the service in the near future. Users who want to try the service can try a temporary account by signing up for the service at this url (99 invites remaining). It should be noted that the accounts and the installers will stop working in a week's time.

It would have been nicer if beta users were allowed to continue using the service. This severely limits the service right now.

Got a reply from Volery about some of the issues that I addressed:

You're right about the one week period being too limited. Although the site won't be updated to say it until later, we're going to allow all beta accounts and installers to work through our whole beta period. This change applies to all existing and new beta accounts.

For the long filenames issue we currently limit the name to 128 characters. We may need to lower this further if users run into trouble.

Good news is that the beta accounts and installers will now work longer than the initial seven day period.