If you want to send a video to computer users with limited technical knowledge you usually have to consider that they might not be able to play it if you send it in a video format that is not supported by default by their operating system. There are three possibilities for this situation. Number one is to upload the video to a video portal and send the link to the video instead of the video to the recipients. This ensures that they can watch the video if they have a web browser with Adobe Flash installed.

The second option would be to install a compatible video player on their computer system to make sure they can play the videos that you send. The third and sometimes most convenient option is to use a program like Make Instant Player to combine the video with a video player that is capable of playing the video. 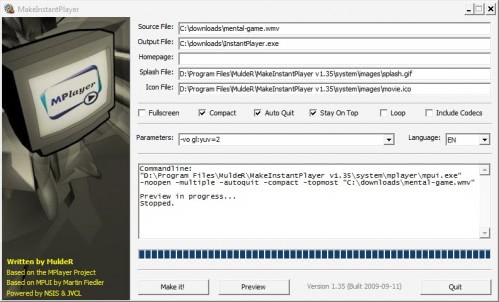 Several options are provided to customize the output. The user can choose between fullscreen and compact mode, make the video auto quit after playback, make it stay on top or loop. The include codecs option is only needed for some video formats like wmv or Real Player but not for the majority of formats available.

It is possible to preview the video before starting the conversion. The only problem that might occur after sending the executable to recipients might be their reluctance to click on an executable file that has been send to them. But that's probably quickly sorted out with a phone call, in person meeting or explanations in the emails.