Google adds columns to the spreadsheet that differ depending on the search term. A search for people for example will reveal names, images, descriptions and their dates of birth and death with the option to add new suggested columns at the end of the spreadsheet which can include notable ideas, main interests or schools / interests. A search for metal on the other hand reveals information about the density, cas number, melting point, atomic number or crystal system. 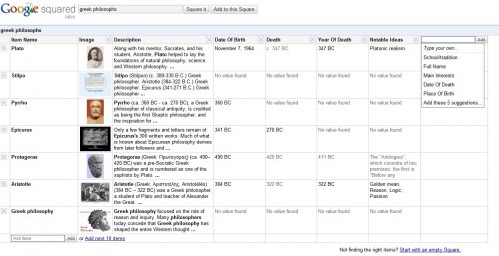 Google Squared is therefor an interesting option when researching information that can be grouped. The conventional way of looking up all American Presidents would be to either perform a search on a search engine and look at the first results that come up or directly visit an encyclopedia like Wikipedia for the information. Most result pages however contain additional text and it is up to the researcher to find the right information.

There is however on problem associated with Google Squared which makes the concept prone to error: There is no quality control. Google Squared fetches information from all over the web which can lead to errors. Take a look at the results in the picture above. The spreadsheet tells us that the philosopher Plato was born on November 7, 1964. A click on that specific entry displays additional birth days including 424-423 BC of Wikipedia. Plato's birth year taken from Wikipedia's is however marked as low confidence data in this case.

While it is easy to spot such obvious flaws it becomes more difficulty. Who can say that the density of Platinum is really 21.45, that the maximum speed of the German WWII tank destroyer Jagdpanther was indeed 46 km/h or that Saturn's orbital period is 29.46 years.

This means that it is always advised to find at least one additional source of information that backs up the information presented by Google Squared.

Update: Google Squared has been discontinued.

Previous Post: « Join The Experiment: One Week Of Bing Only Searching
Next Post: « Search Bing And Google Simultaneously