Tau Analyzer is a CD audio analyzer that can determine if an audio CD has been produced using original sources or if there are signs if audio compressions in the audio files. The first would indicate an original audio CD while the later hints at a CD that was produced using compressed audio files like those from music download portals.

The developer has designed the audio analyzer to provide the means to distinguish original studio-based CDs from poor quality fakes. While that is probably nothing that an average listener would care about it could make a difference for music enthusiasts.

Tau Analyzer will analyze the audio tracks of a selected CD and display a status for each analyzed audio track. The status CDDA indicates an original source while MPEG hints at a poorer quality. 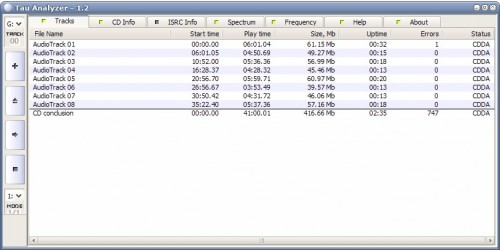 Tau Analyzer is another software that can analyze audio files. It can only analyze CDs unlike the audio analyzer Audiochecker which we reviewed a few days ago.

Update: Tau Analyzer has not been updated every since it was released back in 2005. The program is still working in newer versions of the Windows operating system. We have just tried it on a 64-bit version of Windows 7 successfully. That's however not a guarantee that the program will continue to work that way when future versions of Windows are released.

You need to have an audio CD at hand, and select the correct drive letter for the program to start its analysis of the CD's quality. The program displays the contents of the D afterwards, and you can start going through the different tabs that it populates with data. A click on the analyze CD button starts the actual analysis which may usually takes a few minutes before it completes. The ISRC Info, Spectrum and Frequency tabs become available at this point.