The audio analyzer Audiochecker can verify the origin of APE, FLAC, SHN, WAV and LPAC audio files and determine if the music is indeed in lossless format or a fake. Version 2 of the audio software is currently available as a beta download. The program is portable and can be executed directly after unpacking its contents to the computer.

Directories, files or tracks from audio CDs can be selected for the audio analysis and verification. Audio Checker can crawl subdirectories if the user enables the option in the program's settings. 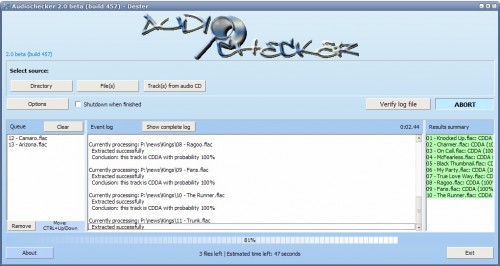 The speed of the audio analysis depends mainly on the computer's processor. It usually takes several minutes to verify one music album.

Audio Checker displays the results during the scan. Each analysed audio file is highlighted in green or red. A green audio file passed the test while a red one failed it. Percentages are shown that define how close to the original the audio files are.

The developer of audio checker is constantly improving the audio analyzer. Latest plans are the addition of the wavpack format. Audio Checker is multi-lingual and compatible to most versions and editions of the Windows operating system.

Update: The program has been discontinued. It is no longer available on the developer's website, which appears to be down though.