Dreamweaver and Frontpage are no doubt the most popular WYSIWYG (what-you-see-is-what-you-get) HTML editors but carry a pretty large price tag, with Dreamweaver costing about Â£500! Naturally, neither work under Linux either! KompoZer is a free, open-source and cross-platform WYSIWYG editor which should fill the needs of any home user.

Whilst KompoZer has not been updated since 2010, the major mark-up languages haven't changed since then so it should still work. KompoZer is based on Gecko, the rendering engine which Mozilla amongst others utilizes, and is a fork of Nvu (another WYSIWYG editor which is now not developed), itself a fork of Mozilla Composer!

KompoZer has all the obvious features of a WYSIWYG web editor: HTML and CSS can be edited; FTP support; tables; and tabs to navigate between pages and views. Some nicer features include an integrated W3 validator and support for XFN.

Binaries are available for Win32, PPC Macs (which will run on Intel-based ones) and Linux. Source is also available so it can be compiled for other operating systems.

Like Nvu, the application can be used from a USB pen.

I personally use KompoZer if I quickly need to whip up a webpage and I don't have the patience to code it in Textmate. It's certainly usable, produces relatively clean code and it's Â£500 cheaper than Dreamweaver! 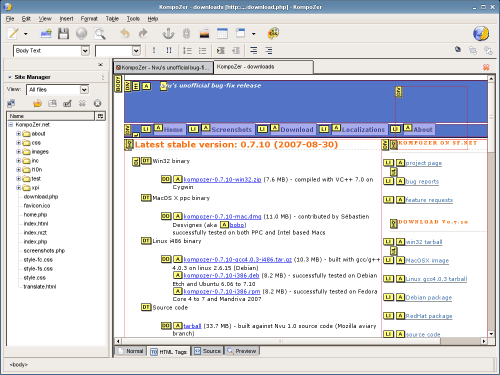 Update: The latest KompoZer update dates back to 2010, which means that the HTML editor has been updated in the meantime. Not so good is the fact that we have 2012 meaning that it has not been updated in the past two years. the program comes packed with features, including a CSS Editor, automated spellchecker, ftp site manager, color picker, various styles and form editing and creation support.

The latest available version is KompoZer 0.8b3 for Windows, Mac and Linux.Â  While that should work well on supported systems, the lack of updates in the past two years are an indicator that the program has been put on ice by its developer.