The startup speed of an operating system usually receives more attention than it deserves. Only a few users are booting their systems more than a few times per day while most users boot it probably only once if at all.

While users who boot the system a lot benefit from improved startup times, for instance a decrease from two minutes to 30 seconds, it is not really something that should matter for the majority of users.

The startup is on the other something that all users experience and if it is really slow, something that you may want to improve regardless of how often you boot the PC in a given time period.

No technical knowledge is required to run the software program. What makes it interesting, more so than other programs with a similar functionality (Boot Timer), is that it rates the startup time. This gives you an indication on how his system rates when compared to other Windows systems.

Another advantage is that BootRacer records several values, to be precise the time it takes boot to logon and to the desktop.

The boot speed rating will get the highest rating if the startup speed of the Windows operating system is below 60 seconds. Many systems will fall into that categoryalreadyÂ  and it would probably make sense if the developers would change the ratings to reflect this. 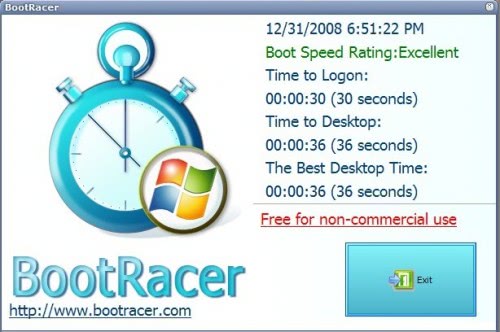 BootRacer can be configured to run at every system startup or only once.

It makes sense to run it on every startup in the optimization phase. If you are confident about your boot time you may want to run it once to take a look at the the result.

If you plan to make changes to your system, you may want to use Boot Racer to test the impact on the system's boot time, which would mean to restart the system after every change, to see if improvements in regards to the system start were made.

Boot Racer is compatible with all recent versions of the Windows operating system. It is a useful tool that you can use to measure the boot time of your version of Windows.

The software program is free for non-commercial use, and can be run under non-administrator accounts.