AutoLyrix is a small cross-plattform software program that can automatically identify the song that is playing in a media player to display the lyrics and album art of it. Compatibility seems to have been of utmost importance to the developers of the software. AutoLyrix is able to detect songs in dozen of music players including Winamp, iTunes, Windows Media Player, Last.fm, XMPlay, AIMP2, Screamer Radio and provides a way to make it compatible with practically any player that is not supported.

The software will automatically search the Internet for information about the current song and display the album art and lyrics in two independent windows. It is possible to refine the search if the first hit did not display the correct items. It can happen that the lyrics are not the only information displayed as the software uses an auto parser to parse the contents.

This can be fixed easily however by simply removing the unnecessary information. Results can be saved so that only those information will be displayed the next time the song is being played on the computer system. 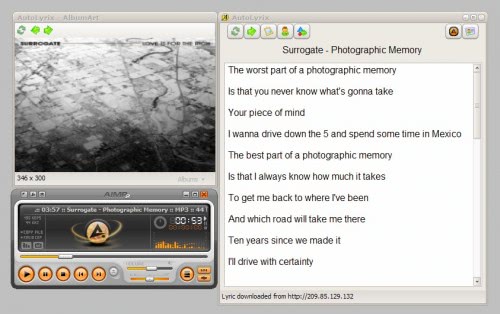 Update: The developers have improved the software further. The latest version supports a whole bunch of new features including the ability to translate lyrics using Google Translate or Yahoo's Babelfish, to export lyrics to the iTunes library or iPod, or directly into mp3 files, and an option to edit the lyrics or album art when a song is playing in the iTunes software. The new version furthermore supports plugins which can further extend the software.