Most alarm clocks put everyone who has to get up at different times throughout the week at a serious disadvantage. The people using the alarm clock have to remember to set the alarm to a different time whenever their schedule changes which could mean that they have to do it every day of the week. That's highly uncomfortable and was the main reason why Vinod Tandon wrote the College Alarm Clock Program.

The main feature of the College Alarm clock program (discovered at Donation Coder is to set a different alarm for every day of the week. This means it is possible to vary the alarm on a daily basis which includes the option to not use an alarm at all on some days. 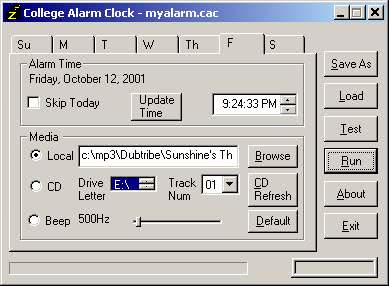 The alarm clock program lets the user define the type of alarm as well. The choice ranges from playing an audio file from the PC, a track from a CD or a beeping sound that uses a specific Hz setting. It is possible to select any audio file on the computer that can be played with the default audio player unlike many other alarm clock programs who restrict the audio files to wav only.

Update: The College Alarm Clock software has been discontinued and the developer website deleted. The program is still available on third party sites, for instance on the Portable Freeware Collection website. The program should work fine on most Windows operating systems, but since it is not updated anymore it is likely that it will eventually stop working.

Update 2: We have uploaded the latest available version of the College Alarm Clock to our own server. Click on the following link to download it to your computer: [Download not found]