Gernova Keylock is a specialized software to detect keyloggers on a system. Keyloggers are used to log user input which includes urls that the user enters as well as usernames, passwords and even information like credit card data or account numbers. The application is portable and can be run from any location.

It's unfortunately only available in German but since it does not require lots of user input it can be valuable for non-German speakers as well. The only required input is a click on the button "Suchlauf Starten" to start the scan of the system. A check of the box below that button will perform a long scan of the system that requires a reboot.

Once started the application moves the mouse around and tests several behaviors. After a while it asks the user to input text. This happens three times to see if any of the running processes are reacting on the data input. 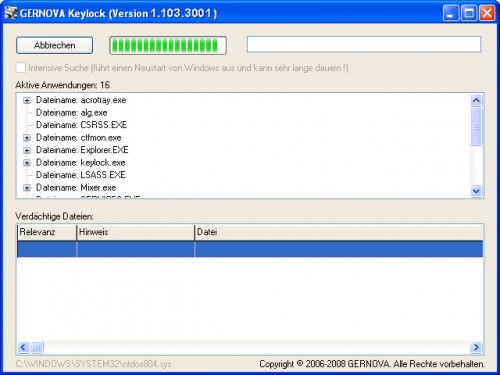 Update: The program is no longer available, and the website it was offered on is up for sale. Since it is no longer updated, it is also no longer recommended to use it since it won't cover advancements in keylogger technology anymore. Several of the more advanced security programs already protect your system from keyloggers so that it is not really necessary to run another software to protect it from it.

It is therefore suggested to install a security software like Avira Free Antivirus or AVG Antivirus Free to protect your system from keyloggers and the threats they pose on today's Internet.