Creating multiple folders in Windows at once is not really enjoyable because Windows itself does not provide a shortcut key or way to create folders quickly.

New folders can be created with a right-click in the folder and selecting New > Folder from the context menu or by clicking on the File menu in Windows.

Update: Please note that the location has switched from the File menu to Home in newer versions of Windows. You may also use the shortcut Ctrl-Shift-N to create new folders.

You can furthermore hold down the Shift key before you click on the OK button to be taken directly to that folder in Windows Explorer after its creation. 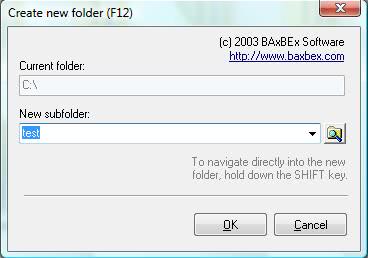 I would not run the application all of the time but it does come in handy if multiple folders have to be created, especially if a complex folder structure has to be created.

To create a new folder in those operating systems use the shortcut Ctrl-Shift-n to do so when the location is active that you want to create the new folder in. You can press the shortcut multiple times to create several folders in rapid succession, note that they are named New Folder then and that you may want to rename them afterwards.

Martin Brinkmann is a journalist from Germany who founded Ghacks Technology News Back in 2005. He is passionate about all things tech and knows the Internet and computers like the back of his hand. You can follow Martin on Facebook or Twitter
View all posts by Martin Brinkmann →
Previous Post: « Format Factory review
Next Post: Gernova Keylock »