The function to undo closed tabs in Firefox comes in very handy and I make use of it regularly. That got me thinking that there has to be a similar function in Windows that allows me to undo closed folders as well so that they would be reopened on the system. It probably happens as regularly as accidentally closing tabs in Firefox and normally means to waste ten or so seconds to open that specific folder again.

Windows does not have that function build in, that's for sure but I found the software Folder View which, among other features, comes with a folder history. The application basically adds another toolbar to Windows Explorer that provides fast access to selected folders on the computer's hard drive.

This is pretty useful as well but I mainly use it because of its recent folders option that displays a list of the recently closed folders. A click on one of the folders would open the folder again making it possible to continue working with it.

I recently stumbled upon another application that enables you to open last closed folders or applications on all recent versions of the Windows operating system. Undo Close is a free program that you need to run in the background to take advantage of its functionality. 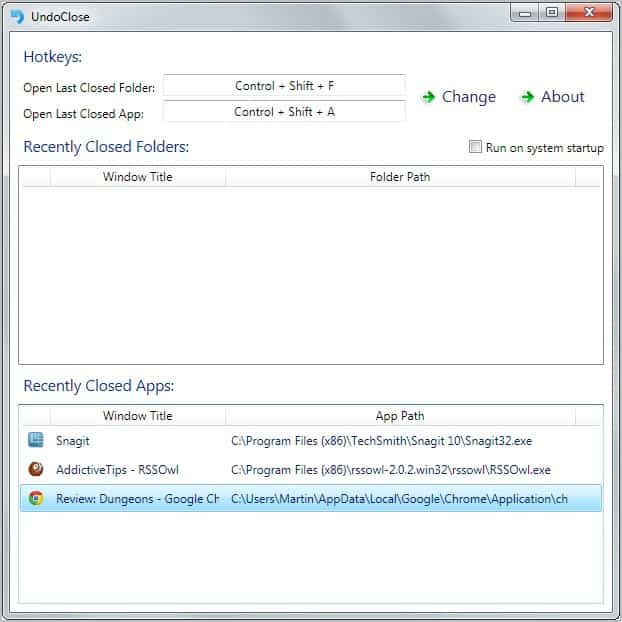 Martin Brinkmann is a journalist from Germany who founded Ghacks Technology News Back in 2005. He is passionate about all things tech and knows the Internet and computers like the back of his hand. You can follow Martin on Facebook or Twitter
View all posts by Martin Brinkmann →
Previous Post: « How to add your music to videos
Next Post: Windows Media Center blocks TV Show recordings on request »