Windows loves to use virtual memory. Even if you set the value of virtual memory to zero it is still being used. It's basic use is to provide additional memory if most of the RAM of the computer is already used. This virtual memory is taken from the hard drive from so called paging files. Most optimization articles suggest to use between one and three times of the amount of RAM as virtual memory.

For a 2 Gigabyte system it would mean between 2 and 6 Gigabyte of virtual memory preferably taken from a secondary hard drive and not the system partition. The Virtual Memory to low warning pops up if the RAM and virtual memory are not able to store all the data needed and there are basically two solutions for this.

The first one would be to install more RAM. If you run Windows Vista with 512 Megabyte you will have an overall experience of slowness and might experience the virtual memory to low warning quite often even if you set its value to 1.5 or 2 Gigabytes. I would suggest to increase the RAM to 2 Gigabyte (or 4 Gigabyte) if you have the budget.

Ram is not that expensive currently and you can get 4 Gigabytes for as low as $75 plus shipping at Newegg currently. (make sure your computer is compatible and read the reviews).

If adding more RAM is not an option you can try to raise the virtual memory itself and move it to another hard drive if one is available. Depending on the settings already in place I would choose a value of at least twice the RAM amount and at least 2 Gigabytes.

You can check the virtual memory setting by pressing the [Windows Pause] keys which should open System Properties. Click on the Advanced tab and there on settings under Performance. 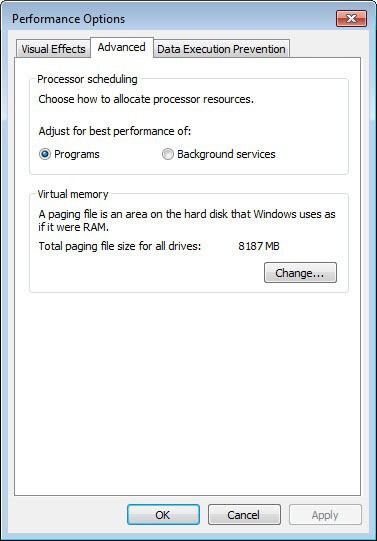