Notepad is fast and that is probably the only good thing that I can say about the software that ships with Windows. It has a file size limitation and a lot of other limitations as well. Many users prefer to use so called Notepad replacements that do not have the limitations and I would like to introduce one that is called Akelpad.

Akelpad is lightweight. That is the first thing that I can tell you about it. It uses roughly 3 Megabytes of Ram with one text document open and all available plugins loaded. Yes that's right, you can enhance the software with plugins to add functionality to it just like you can with Notepad++. Akelpad itself has a size of 186 Kilobyte and has several comfort features that are unknown to Notepad.

This includes the ability to load text documents that are larger than 64 Kilobytes, document previews before opening them, editing of read only files and more. Plugins add a number of additional features to Akelpad like syntax highlighting, auto completion, sessions, macros and scripts and auto saving. 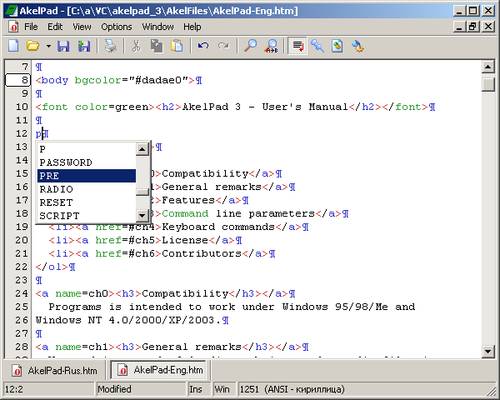 Akelpad supports unicode codepages and unicode strings, text previews, printing of documents and previews, plugin support and text replacement options. Plugins are listed on the developer website. They can be used to increase the functionality of the core program, for instance by adding coding related functionality like syntax highlighting or a better file explorer.

You might be asking about the differences to other Notepad replacements such as Notepad++ and I can only say that Akelpad uses less resources to display the same text document but does not offer all of the functions that Notepad++ offers. It's worth a try if you ask me and definitely an option if you are looking for a Notepad replacement and have not made a decision yet.

Update: Akelpad is still available. There are however other alternatives that may be better suited for text editing needs. Alternatives include the very popular Notepad++ or Quotepad

Martin Brinkmann is a journalist from Germany who founded Ghacks Technology News Back in 2005. He is passionate about all things tech and knows the Internet and computers like the back of his hand. You can follow Martin on Facebook or Twitter
View all posts by Martin Brinkmann →
Previous Post: « Vista: Disable UAC for select applications
Next Post: Multi-monitor Taskbar »