Notepad++ is a free source code editor (and Notepad replacement) for Microsoft Windows personal computers. The freeware application supports many programming languages like C, C++, Java, C#, XML, HTML, PHP and Javascript, but can also be used for normal text editing. It can map the .txt file extension and many other extensions to itself so that it becomes the default application for those file types in Windows.

It has many useful features that Notepad is lacking, some worth mentioning are auto completion, the ability to work with more than one document and a multi-view feature that shows two documents at the same time. (that you can edit of course). Another important point is that it does not have the size limitation of Notepad, as it can open documents of any size.

Notepad++ can basically be used as a replacement for the standard Windows text editor Notepad, that's good for editing and writing basic texts, but not so good anymore when it comes to larger texts or code. Notepad++ has been designed for web developers and software developers, as well as other users who need a fast loading text editor with advanced capabilities.

Besides syntax highlighting, which is one of the core features of Notepad++, users can make use of macros, a plugin system, command line options or session management, all of which is not available in the standard text editor Notepad. 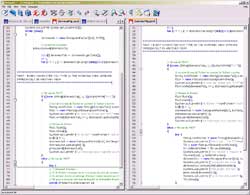 Best of all, Notepad++ does not sacrifice speed to offer the features. You will notice no speed difference between the text editor and the default Windows editor.

Lets talk for a second about session management. Unlike Notepad, which forgets what has been opened once you close the program, Notepad++ remembers sessions and you can continue working on the text files that have been open in previous sessions. If you do not like that particular feature, you can disable it easily on the extensive program options.

Plugins need to be mentioned briefly as well. They extend the functionality of the text editor. A list of plugins is accessible here at Sourceforge. Among them plugins to automatically save texts, a ColdFusion plugin, Color Picker, Comparison plugin or a plugin to minimize JavaScript.

Notepad++ is an excellent program for Windows users who want better functionality than what the standard text editor Notepad has to offer.