Update: Things have changed significantly. While you can still listen to any song online, downloads are not provided anymore for free. You pay $1.80 per sound in the smallest package, or $249 for an annual package that enables you to download as many sounds as you like to your local system.

The sound effects in each category can be sorted by various criteria such as duration (longest, shortest), most popular and highest rated. 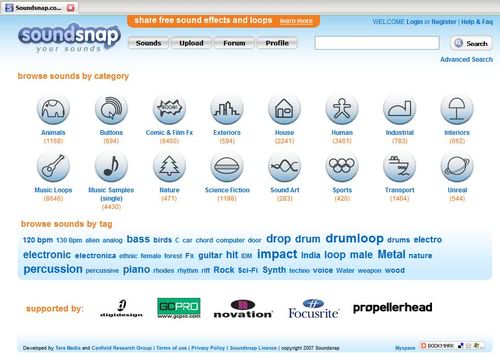 Update continued: The site lists more than 160,00 sound effects and loops currently on its site which are still listed by category when you open the sound page.

You can however use the search at the top instead to find particular sounds that you are interested in.

Sounds are displayed with lots of information. From the type of sound, e.g. woman snoring to nature or industrial sounds.

Each sound can be previewed,  and if you have an account and enough credits, download to your local system.

All Soundsnap sounds are royalty-free which means that you can use them in any commercial and non-commercial application. While you can use them for this purpose, you are not allowed to sell the sounds as is, for instance on sound CDs or as individual sounds on websites.

If you are looking for a free alternative, try the Free Sound website instead. All sounds offered on the site are released under Creative Commons licenses.

Martin Brinkmann is a journalist from Germany who founded Ghacks Technology News Back in 2005. He is passionate about all things tech and knows the Internet and computers like the back of his hand. You can follow Martin on Facebook or Twitter
View all posts by Martin Brinkmann →
Previous Post: « Create Web based Powerpoint Presentations
Next Post: An Advice on Buying and Selling Websites »