ALSong a music player with lyrics

I'm really fond of XMPlay which is in my opinion the best software music player right now. I normally do not even look at other music players except if they offer something different, unique which I want to take a closer look at because of that. ALSong is one of those music players that comes with a feature that sounds interesting enough.

ALSong has all the features that a music player needs these days. It supports a wide variety of different music formats, comes with an equalizer, playlist support and different skins. The feature that sets it apart is a lyrics synchronization feature. With it you can search for song lyrics in the player.

Lyrics that are found are automatically displayed when you play a song, much like a Karaoke player would display them. If the automatic search does not find songs, then you can add them manually as well or by using an excellent program such as Lyrics Finder.

It does take quite some time though to synchronize the lyrics with the music. 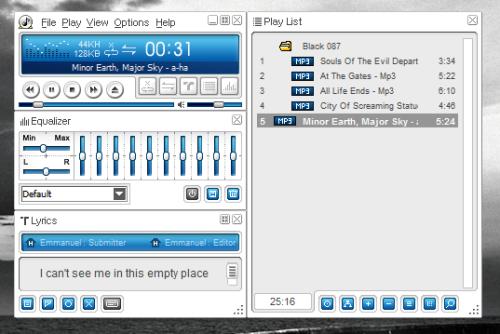 Lyrics that are found online can be edited as well of course. ALSong has another interesting feature which the author calls Language Learner. This feature makes it possible to increase or reduce the speed of the song which can be useful if you want to listen to specific parts of a song in slow motion, or faster.

ALSong displays a desktop music bar as well which is a transparent bar displaying the current song lyrics. I will not use it as my main music player but it does offer some features that may really be interesting to some users, especially those who like to sing along or read lyrics while music is playing.

Update: AlSong has last been updated in 2009, which may indicate that the author has stopped development. Users will eventually run into issues using the program, especially since it relies on the Internet to provide access to the lyrics.

Alternatives are programs that ship with lyrics components, or offer plugins that add lyrics to the player. This includes Winamp or XMplay for instance.