Solid State Disks have no moving parts which means they make no noises whatsoever, have a largely reduced access time, are not prone to electro-magnetic failures, have a lower power consumption, no heat generation and a better ability to endure extreme shock.

Solid State Disks do have some limitations though. The most dominant ones are currently availability, pricing and capacity.

The largest capacity of Solid State Disks is 128 Gigabytes at the moment which I have seen for sale for roughly $3800 (SUPER TALENT 2.5" 128GB SATA Internal Solid state disk). More affordable units are 32 Gigabyte Solid State Disks (for instance the SAMSUNG 32GB IDE Internal Solid state disk) that retail for roughly $400 and 16 Gigabyte disks for $200. 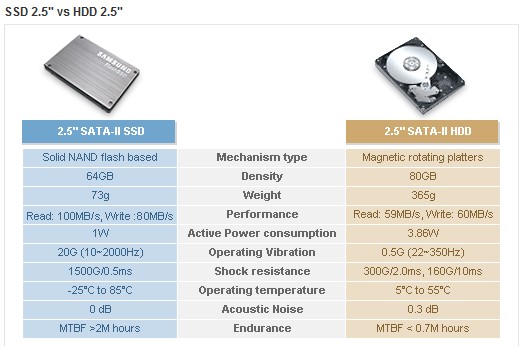 My next computer that I will build next year will have one of those Solid State Disks as the main boot hard drive resulting in faster boot times of the operating system, lower noise level and faster response times. I will still use conventional hard drives for storage mainly because the pricing is currently way out of line. Reminds me of the good old days when a 10 Megabyte hard drive cost as much.

This technology will be even more exciting for notebook owners. They could for instance replace their conventional hard drive with a solid state disk to reduce the noise level and speed up all processes.

Update: Solid State Drives have come a long way ever since I wrote the article back in 2007. What's probably most exciting about them right now is that pricing has come down considerably while storage capacities have gone up.

While they are not as cheap as platter-based drives yet if you compare storage to pricing, their pricing and storage space has become attractive enough.

What may also be interesting is that SSDs are available with SATA III interfaces as well as PCI Express interfaces. Some developers have started to experiment with Raid-like devices which connect multiple SSDs on a single PCI Express card for fast performance.