PC Pal is a software that is currently in Beta that checks your Windows installation for weaknesses and possibilities to optimize it. The process is very user friendly and requires minimal user interaction.

What you do basically is push a single button and wait for the program to check your computer for problems related to security, networking, printing and performance.

A full scan does not take longer than a few minutes and results are displayed in a scrollable list afterwards.

Each item can be expanded to display detailed information and a button to fix the problem. A fix could be to activate a feature in Windows, like activating the Windows Firewall or the Popup Blocker in Internet Explorer, or a link to third party software or updates to installed software.

Issues are divided into critical and normal ones. The three critical issues that were found on my test PC told me to activate the Windows Firewall, install an Anti-Virus software and download the latest Flash player. 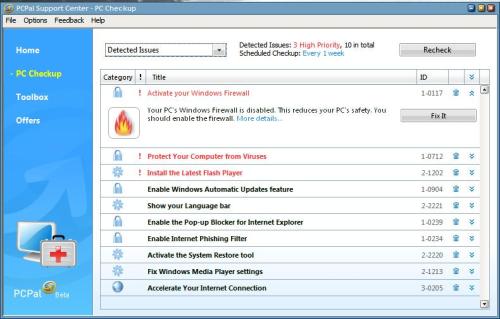 I would not suggest to run it as a background process all the time but fire it up once a week or so to check for new critical issues.

Update: Please note that the PC Pal software is no longer in active development. In fact, development of it stopped in late 2007 which means that it is of little use as of today, as it does not support newer versions of the Microsoft Windows operating system that came out afterwards and does not check for new issues as well.

We have uploaded the latest working version of PC Pal to our own server. If you really want to download it, you can do so with a click on the following link: pcpal_setup.zip

Alternatives that you can run instead of PC Pal are System Security Guard, Secunia Personal Software or SlimCleaner.