The beta version offered a new minimal user interface that we found to be most appealing to inexperienced computer users, as it was lacking in terms of information that it provided.

Existing PSI users on the other hand may have noticed then that Secunia cut down on the information the program did provide its users with in previous versions. Features the company removed included threat ratings, detailed version and program information, as well as links to advisories and other related information.

Secunia PSI 3.0 final is now available on the official project website. It is compatible with 32-bit and 64-bit Windows XP SP3 or newer operating systems. Administrative privileges are required to install and run the program.

When you start the program for the first time you notice that the interface does not seem to have changed at all since the beta version of the application was released in February. All you can do is click on the scan button to have the program scan your system for software installations.

The program versions are then compared with an online database to identify programs that need updating. A system score is generated and displayed based on the update level of the system and its programs. 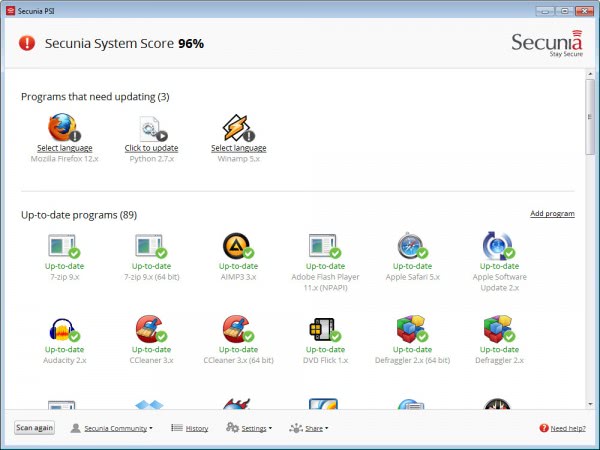 All programs that require updating are displayed on the top, and depending on those, you may see an installation dialog right away triggered by PSI, or are asked to pick an interface language first before installation commences.

Programs that have not been identified by Secunia right away can be added manually via the add program link. Before you can do that, you may need to add the Secunia website to the list of trusted sites in Internet Explorer (which is used by the program).

If you do not want updates to be installed automatically, you need to disable the preference under Settings > install updates automatically. It would obviously have been better if users were asked on first start whether they wanted to make use of the feature. The preference can be changed before the system is scanned but users need to know about it to do so.

Update: The latest version of Secunia Personal Software Inspector displays a prompt during installation that you can use to define the default update behavior in.

You can add or remove drives that you want the program to scan under Settings as well. By default, only the main drive will be scanned by Secunia PSI.

Part of the program has been dumbed down, which I personally do not like at all. The idea was probably to make the program easier to use. All it basically takes is to click on a button to have Secunia scan the system and install programs automatically in most cases, but the removal of features makes it less desirable than before.

It is still a useful program to run regularly to make sure your software is up to date.