The Windows maintenance software SlimCleaner has just been updated to version 4.0 by the developing company SlimWare Utilities. The program can best be described as CCleaner on steroids. While it is not as sophisticated when it comes to the cleaning of temporary files on the system, it includes other optimization and maintenance features that set it apart.

Probably the coolest feature from a user perspective is the rating of all installed programs and running processes on the system using a community-based rating system. While that is not a security feature as some may have suspected, it still provides you with information about processes and programs on your system that you can use to make educated decisions about whether these should be on the system or not.

Another feature is the built-in software update checker which you can use to find out if software on your system is out of date and requires updating. It is not as comprehensive as the software updates monitor SUMO in this regard, but still effective enough to be useful.

The interface itself has not changed that much as you can see on the screenshot below. 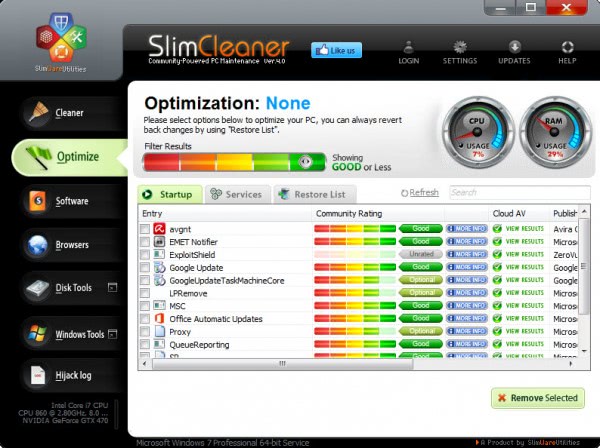 The developer website has not yet been updated with information regarding the new release. A press email included the following paragraph that highlighted the major changes in SlimCleaner 4.0.

Solid State Drives are optimized with the SSD Optimization tool built-into the application. According to SlimCleaner, it logically defragments the drive "so that to Windows, files are stored in logically sequential sectors". I suggest you check out the review of the beta version of the program for in depth information about what is new in the program.

You can download the latest version of SlimCleaner from the developer website. The program is fully compatible with all recent 32-bit and 64-bit editions of the Microsoft Windows operating system.