Play music with people around the globe

Users can download the Musigy software after signing up on the website. Musigy Maker is currently available for Windows PCs and has a size of roughly 9 Megabytes.

You can see the other musicians in the same application, add friends, search for users and tweak the settings to optimize the output. I'm not a musician and it would be really interesting to hear from users who actually tried Musigy Maker. 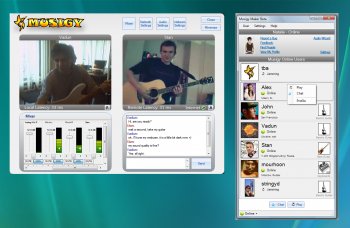 The idea to play music together with other Internet users on the other hand was sound, as there could be a number of reasons why you can't jam together in one location.

Maybe you are traveling a lot but do not want to miss out on your band's sessions, or you have created a band with international friends of yours.

With the service's website gone, so is the software that was created for it. While it is still available on some third party download sites, it is likely not working properly anymore.

Alternatives are sessions in Skype for instance which is supporting group video conferencing. This may not be the same deal as you may need longer to set everything up, it should work equally well once that stage has been passed.