A new version of iTunes Sync has been released today and can be downloaded from the developers website. The software syncs iTunes with mp3 players other than iPods. I'm still not sure why users would want to use iTunes but I suppose it has something to do with the ability to buy music and videos there.

The new version is now available in three languages which are German, English and Spanish. Other changes include reduced memory usage, proxy support, support for the three file extensions wma, wmv and asf, new folder structures and better handling of duplicate playlists.

Itunes Sync should work with most mp3 players on the market, the developer obviously has no way of testing his software with all players available. Some users send in information regarding compatibility with their mp3 player but I suggest you simply try it out and see if iTunes Sync works with your player. 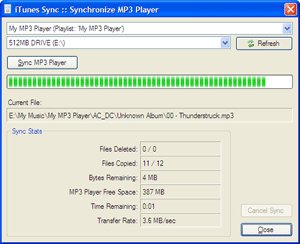 The software has a size of only 450 Kilobyte and requires the Microsoft .net framwork 2.0

Update: iTunes Sync has not been updated since 2009, and while that is usually an indicator that the program may not be working anymore with updated iTunes versions, it may not be the case with this particular program.

The application is compatible with all recent versions of Windows, including systems released after 2009, which is always a good sign in regards to compatibility.

The author of the program has published a list of tested mp3 players that are known to be working with the program. While that is not a definitive list, it tells you that any mp3 player on that list can be synced with Apple's iTunes software.

The process is divided into the following three steps: