The new version of Opera introduced a so called Speed Dial feature which displays nine thumbnails of websites for fast access that have been selected by the user. The nine websites are displayed when the user opens a new blank tab or a new blank window and can be accessed by either clicking on the thumbnails or pressing the corresponding numbers (1-9).

Update: Mozilla changed the extensions system of the Firefox web browser with the release of Firefox 57 in late 2017. Speed Dial is no longer compatible with Firefox and the extension has been removed from the Mozilla Add-ons repository. You may check out Group Speed Dial instead which offers similar functionality.

The exact same feature is now available as the Firefox extension Speed Dial. Websites can be assigned to the nine spots by using the "Set as Speed Dial" entry in the Bookmarks menu. This is slightly more uncomfortable than in Opera where it is possible to click one of the nine spots and select an entry from the bookmarks.

The website has to be loaded first before you can add it to one of the Speed Dial spots. Several options can be configured including where you want the Speed Dial bookmarks to show up. A website shown there can be loaded by clicking on it, pressing the number or by pressing CTRL + the number from any open tab. 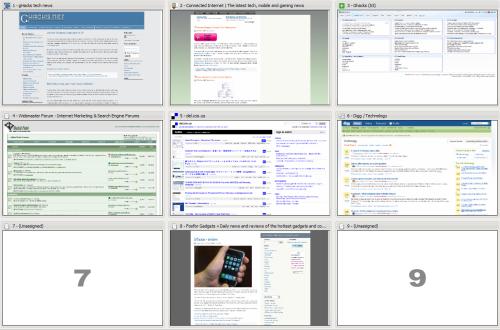 I personally don't think that this is an ultimate feature but it could be nice to have for some users especially those who use the feature in Opera and want to use it in Firefox as well. I will stick to my bookmarks toolbar for now which is just a bit faster in my opinion.

Update: Mozilla is currently testing a native implementation of a Speed Dial like feature in the Firefox web browser. Firefox's New Tab page is currently only available in development releases of the browser, and it needs to be activated even there.

Once done you see nice website thumbnails and titles whenever you open a new tab page in the browser. The functionality is relatively limited right now. You can remove entries which are then replaces by others, reload the display or click on a link to be taken to the web page.

Update 2: Firefox now ships with a Speed Dial feature of its own, an extension is no longer needed for it. What you can do however is install extensions to improve it and personalize it.

Speed Dial adds several interesting options that Firefox's default new tab implementation does not support. This includes the ability to create multiple Speed Dial Groups separated by tabs, easier options to add sites to Speed Dial, global shortcuts to open sites that you have added to the page, the exact layout and number of websites per page, and dozens of advanced features.

Keyboard and mouse controls: Define shortcuts that launch different actions for when you activate the Speed Dial websites via the keyboard or the mouse. This includes opening them in the current or in a background tab, displaying contextual menus or using the browser's default action.

Advanced preferences that define when thumbnails are captured and other features.

Define exactly how the thumbnails are displayed, and also their controls when you mouse over a thumbnail.

If you want more control over the speed dial feature of Firefox's new tab page, then you may want to give this excellent extension a try as it does exactly that.